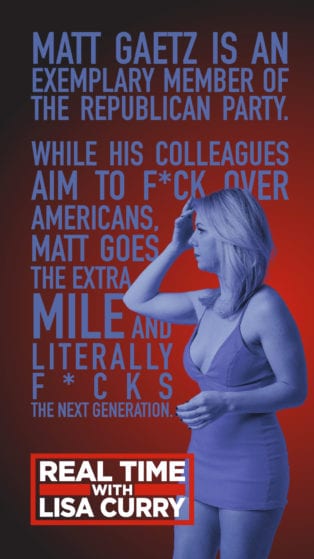 Since Bill Maher Got COVID-19, Lisa Curry Decided to Do Her Own Ep. of Real Time

You might have heard that, even though he has been fully vaccinated, Bill Maher contracted COVID-19 amidst shooting his award winning weekly series, Real Time with Bill Maher. Maher was asymptomatic and taping for last week and this week were postponed.

Since the voice of Real Time is so “crucial” to the national conversation on any hot button issue, comedian and writer Lisa Curry, on her own, stepped up to the plate to do her own virtual, completely safe episode of Real Time (that would be hosted by someone a little more with the times).

Curry even assembled a stacked panel of Subhah Agarwal, Maggie Maye, and Calise Hawkins to riff over the news (over Zoom) just so you could have the full Real Time experience. Go enjoy Real Time with Lisa Curry and get your Real Time fix here.

If you’re needing to continue needing to vent your frustrations and not feel like you’re crazy that what just happened with the election was crazy, the live stand-up special that Bill Maher just did on Facebook Live is now on YouTube.

Recorded just before the election at Largo, it’s called Whiny Little Bitch and is all about the newly elected 45th President of the United States. Maher is unapologetic (even more so than he is on Real Time) and showcases really what sort of Commander-in-Chief and VP we have to spend the next four years with.

With his appearance coming the Friday before the election on Tuesday, November 8th, Obama’s appearance on Real Time ought to be one of the most fascinating in the show’s history even beyond the fact that a sitting President is sitting down with Maher.

So, this week, President Barack Obama’s interview with Samantha Bee will air on her show, Full Frontal, on this Monday/Halloween. The POTUS will close out the week at another firebrand, political comedy show by finally taking Bill Maher up on his open invitation and appear on Real Time.

Few hosts as big as Maher have publicly lobbied as hard for an Obama sit down, which should make this, as suggested above, a fascinating interview.

Watch it on Friday, November 4th on HBO at 10PM.

HBO is on a roll per usual.

Between, Silicon Valley, Veep, and Real Time with Bill Maher, HBO garnered four Writers Guild of America Awards this year. This is probably one of the few awards this awards season where the premium cable network didn’t have a streaming service like Netflix or Amazon challenging its critical acclaim supremacy.

Also, Inside Amy Schumer makes yet another victory lap with its win for “Comedy/Variety-Sketch Series”.

Here are the rest of the comedy winners announced last night:

Adapated Screenplay–The Big Short-Screenplay by Charles Randolph and Adam McKay; Based on the Book by Michael Lewis; Paramount Pictures

Laurel Award for Screenwriting Achievement-Elaine May

The full list of WGA Awards winners are here.

David Letterman always distinguished himself with his era of The Late Show  from the rest of the late night talk show landscape by interviews being allowed to get testy if the conversation found its way there. Dave wouldn’t back down and usually have the upper hand with anyone who sat across his desk.

Now, with Stephen Colbert at the helm of The Late Show, Stephen not only invites a dance in his conversation that can switch between sharp quips to pure sincerity on a dime, but invites intellectual and/or challenging guests on a more regular basis than almost anyone else on a late night right now. Stephen seems to pull off tight rope walking in his interviews quite well by making the conversation engaging, playfully jabbing them, and seemingly not even breaking a sweat if things get heated.

Not that any of you really doubted Stephen Colbert would be a great heir to The Late Show legacy, but you can now see it for yourself.

Watch Colbert put all of this on display as he chats with Bill Maher about Trump and being Catholic all while keeping the laughs coming.

1) Comedy Legends Jerry Seinfeld (@seintime) and Don Rickles (@donrickles) joined Twitter recently and none of them have tweeted about Carmeggedon. WHAT’S THE DEAL WITH THAT?

5) Witstream and BBC’s Ministry of Laughs join forces today at 6PM PST for some of Twitter’s funniest to live tweet whatever they’re doing (like they normally do) with the hashtag #ministryoflaughs.

7) Congratulations to Paul Scheer’s How Did This Get Made? for surpassing one million downloads!

11) Waitresses of LA diners that stay open late, if a guy is eating alone don’t make him feel like he’s wasting your time and you might get a really good tip because as much as it might look like I’m they’re waiting for someone, they’re not; no one wants to hang with them on Fridays.  Just sayin’.

1) The “insider comedian interview” format has gone viral… big time.  Forget about shoddy camera work in green rooms and back alley studios that double as living spaces.  Bigger names are coming out of the woodwork.  First Marc Maron w/his “WTF Podcast”.  Recently, Dave Holmes and “A Drink with Dave”.  Most recently, Bill Maher and “12 Mile”.  Did I mention that everyone should be watching/listening to these?

2) Everyone will be live tweeting during the Oscars and I will be here in our cavernous office keeping everyone up to speed as to what’s the funniest things written during the show.  We hand pick our featured tweets here and I almost suggest that you don’t need to watch the Oscars because the Comedy Bureau Twitter feed will be almost more entertaining (only because you need to watch the telecast to put it into context).

3) In case you were wondering, the Tip of the Hat, this week, goes to Eddie Pepitone for the start of the Puddin’ Comic Strip.  Article to follow later today.

7) This is the 127th Day of the Comedy Bureau and both my arms are still here.  Take that James Franco.

Huffington Post Comedy Live at the Roxy last night and I didn’t know about it.  How about that?