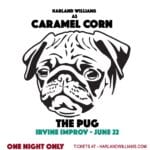 So, this week, Harland Williams will be doing a taping as his character, Caramel Corn the Pug. That means he will be wearing a giant pug head while on stage and be doing stand-up as an anthropomorphized dog.

Yes, this seems to be really happening.

Watch Harland Williams Do Stand-Up on The Tonight Show

Usually, Harland Williams opts for panel interviews and gets really “out there” with his ideas and general thought process when on talk shows. Just watch and clip of him chatting with Conan O’Brien for proof.

Last night on The Tonight Show, Harland showed us that he could also do stand-up and be just as weird and wonderful when on the couch in an interview.

It’s a trend now that big music and arts festival have a solid comedy line-up and we’re definitely on board for that.

The Pemberton Music Festival that’s set to take place in Pemberton, British Columbia from Jul. 16th-19th is taking cues from SXSW, Bonnaroo, Outside Lands, Sasquatch, and more to have comedy alongside their massive music line-up.

So, next to the likes of Kendrick Lamar and The Black Keys, The Pemberton Music Festival line-up also has:

Now that we’ve peaked your interest, you can get your tickets right here.

Harland Williams Gets Supremely Silly Per Usual on Conan

Harland Williams is one of our favorite late night guests usually evidenced by his unfiltered tomfoolery while on Conan.

Here’s another great example of it in his latest Conan appearance.

3) What to Watch/DVR This Week [via Splitsider]

4) Harland Williams interview on Conan.  Spoiler Alert: This is the perfect way to start your day.

5) The Scoomie’s are coming soon.  That’s right the awards for comedians by comedians and not really anyone else just like it should be.  Have category suggestions? Go here.

9) Did you know you could reach the end of your Twitter feed?  Of course you don’t because you’re still part of society.

1) The “insider comedian interview” format has gone viral… big time.  Forget about shoddy camera work in green rooms and back alley studios that double as living spaces.  Bigger names are coming out of the woodwork.  First Marc Maron w/his “WTF Podcast”.  Recently, Dave Holmes and “A Drink with Dave”.  Most recently, Bill Maher and “12 Mile”.  Did I mention that everyone should be watching/listening to these?

2) Everyone will be live tweeting during the Oscars and I will be here in our cavernous office keeping everyone up to speed as to what’s the funniest things written during the show.  We hand pick our featured tweets here and I almost suggest that you don’t need to watch the Oscars because the Comedy Bureau Twitter feed will be almost more entertaining (only because you need to watch the telecast to put it into context).

3) In case you were wondering, the Tip of the Hat, this week, goes to Eddie Pepitone for the start of the Puddin’ Comic Strip.  Article to follow later today.

7) This is the 127th Day of the Comedy Bureau and both my arms are still here.  Take that James Franco.

3) Follow @comedy_palace on Twitter because the Comedy Palace on the 2nd and 4th Thurs. because you should follow them for great offers on Chinese food and a fantastic live comedy show.

4) Kumail Nanjiani on Conan. Uhh, he kills it.

8) Congratulations to comedians Adam Rank and Tim Palmer for placing in the 21st Ultimate Laffdown.