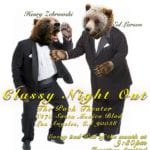 Legendary cult sketch group Murderfist (please get acquainted with them if you’re not already) now have a classy, very classy monthly show at the Pack Theater!

Every 2nd Wednesday of the month, Murderfist’s very own Henry Zebrowski and Ed Larson will be dressed to the nines doing their own very “classy” bits along with a secret line-up of their favorite stand-ups. It’s a damn good, damn classy time (and maybe dress up if you go).

Whether you’re a fan of Last Podcast on the Left, The Brighter Side, etc., you really need to clear out your your calendar for this.

The next Murderfist Presents: Classy Night Out is this Wednesday, again, at The Pack Theater at 9:30PM. Admission, like all Pack Theater shows, is Pay What You Can. Pretty nice, right? 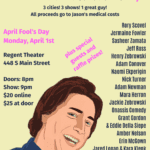 In Case You Didn’t Know, Murderfist Has a Bunch of New Sketches for You to Binge Watch

In that time, they made some of the funniest and darkest sketches that the NYC (and the Internet) has seen. Paste has a great oral history of the group that you should read if you’re unfamiliar with the group’s origins and rise.

The last few years have been kind of quiet for Murderfist leaving us all kind of jonesin’. However, a good portion of Murderfist now lives in LA and seems to having the wheels turning once again. There’s a bunch of new videos on their YouTube channel that you should obsess over here.

This “coming out” sketch is one of our favorites in particular from their latest batch.

Murderfist Is Going To Be on “Friends of The People” Tonight

Well, the wonderfully dark and absurd minds of Murderfist are going to be on TV tonight as they’re being featured on truTV’s Friends of the People.

Tune in 10PM to truTV to see the folks that made this unforgettable rehearsal dinner sketch who will hopefully bring their brand of comedy, that we previously thought was just going to reside on the Internet, to TVs across America.

The 2nd Brooklyn Comedy Festival Is Less Than Two Weeks Away

On the week of Aug. 18th through Aug. 24th, The Brooklyn Comedy Festival comes around again for its second time.

Definitely get your tickets if you’re in and around Brooklyn that week.

Even though we’re far off from Halloween still, NYC’s Murderfist presents a darkly twisted, hilarious sketch called The Dollmaker.

Turns out, in the real world, that creepy living dolls aren’t in high demand as this demonic dollmaker finds out the hard way. Watch it here.

Awesome NYC based sketch group Murderfist presents a rehearsal dinner for a wedding that probably takes the cake for hysterical rehearsal dinners (so long as you’re not actually in attendance for this one).