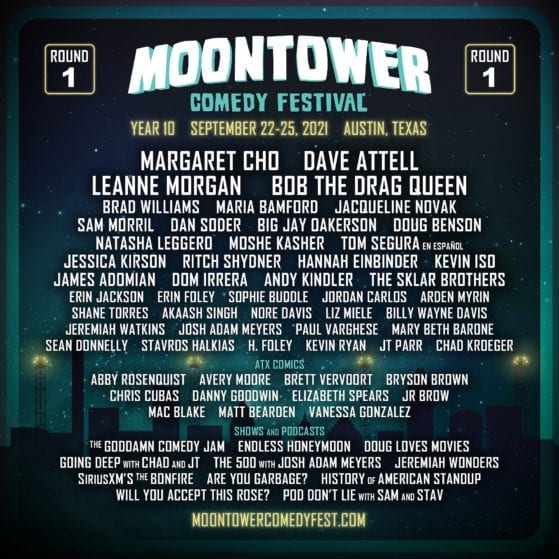 OK, are fingers are crossed (and vaccinated) that this time, this edition of the Moontower Comedy Festival is going to stick. They’ve had to reschedule it more than once throughout the pandemic as the prospect of big time gatherings, especially ones that are indoors seem like a distant dream only a few months ago.

That dream seems to be getting closer to reality with the vaccine rollout pushing forward in the U.S. There are better prospects of things like comedy festivals, such as Moontower in Austin, TX, to happen in full force again. Currently, they’re scheduled the festivities for Sept. 22nd-25th, 2021 and, just like they used to do in the before times, have an already massive line-up in their first announcement including Margaret Cho, Dave Attell, Maria Bamford, The Goddamn Comedy Jam, Endless Honeymoon, and so much more.

Do note that Texas does have one of the lowest percentages of COVID-19 vaccination in the country and we sincerely hope it gets way better by the time September rolls around. If you’re game for comedy festivals in just a few months, you best go get your passes/badges right here right now.

Round 1 is here! 🙌 100+ comedians are invading downtown Austin Sept 22nd-25th to celebrate the 10th year of the Moontower Comedy Festival! Stand-up, podcasts, parties, shows, surprises & more wrapped up into for 4 days of funny 🎫 Badges on sale now: https://t.co/LM5GmRJOyZ pic.twitter.com/apOTPooQvi 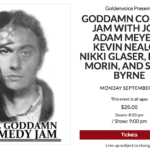 The festivities are set to go down from Thursday, November 17th-Sunday, November 20th. For all of that comedy, you only have to drop $79 for a weekend pass or $35 for a single day pass. That’s a pretty good deal considering the treasure trove of comedians on the bill. A VIP pass is only $129 as well.

If you’re in Texas or have to go back to Texas for Thanksgiving, definitely consider going to Come and Take it.

From a monthly show at a black box theater to a TV special Josh Adam Meyers and The Comedy Jam Band have reached new heights by getting a series order from Comedy Central.

They had to drop the “Goddamn” from the name, but that shouldn’t hold back from how much of a raucous party that Meyers and company will throw. If getting Coolio to join Pete Davidson on stage for Gangsta’s Paradise was just the start, imagine what they’ll do next.

The Goddamn Comedy Jam special is set to make it live on Comedy Central on Sunday, August 28th at 11:30PM.

If you’re skeptical, just watch Pete Davidson ramp up to rapping his heart out to Gangsta’s Paradise (with a little help from a surprise guest) and giving zero f’s about wearing shorts on stage.

Comedy Central is making sure that it’s not resting on the laurels of the heaps of critical acclaim they’ve gotten over the last couple of years.

Announced today, Comedy Central has the following in the works:

Pilot/Script Development with:
-Untitled Jessica Williams Project – “The Daily Show with Trevor Noah” correspondent brings her unique point-of-view to a narrative scripted pilot executive produced, starring and written by Williams with Naomi Ekperigin.
–Untitled Jordan Klepper Project – “Daily Show” correspondent Jordan Klepper has signed a development deal with Comedy Central for a late night talk show presentation.
–Untitled Rachel Feinstein Project – this half-hour pilot starring Rachel Feinstein features hidden camera segments where Feinstein goes undercover to perform social experiments that tackle a different issue or theme each week. The series includes stand-up, sketch and conversations with comedians where Feinstein riffs on the week’s theme.
–Untitled Justin Willman Project – Comedian Justin Willman aims to fix the world’s greatest problems and social injustices using the only logical method we have left: Magic.
–“Do You Want to See a Dead Body?” – based on the Funny or Die shorts, “Do You Want to See a Dead Body?” is a half-hour, scripted pilot that follows Rob Huebel as he embarks on a bizarre quest/adventure to see a dead body with a different celebrity guest each week.
–“Germany” (pilot presentation) – Executive produced by and starring Channing Tatum, “Germany” explores the trials and tribulations of diverse microorganisms living in a microcosm of our world – complete with political scandals, climate change and vaccination deniers. “Germany” is a unique world in which both the laughter and the characters are contagious.
-“Hood Adjacent” – Based on the Comedy Central original series, “Swag-A-Sauraus with James Davis” on Snapchat Discover, Davis, who was born and raised in South Central, one block away from where the sh** goes down, uses his multifaceted hybrid brand of comedy to share his unique take on the world.
–“Live From Everywhere” – shot in front of a studio audience, this live, half-hour variety show for the digital generation uses live streams to orchestrate the coolest, most unpredictable hangouts with celebrities and comedians.
–“Problematic with Moshe Kasher” – a half-hour pilot hosted by Moshe Kasher who uses his own brand of “comedy journalism” to crawl into the social media muck of our most polarizing issues, provocative questions and heated arguments and dissect them in front of a studio audience.
-“Rudy” (pilot presentation) – an animated project written by Robert Padnick that follows childish “cholo” Rudy Cisneros who, after serving a 15-year prison sentence, wants to dissociate from gang life and start being there for his wife, kids and abuelita.
–“Storytime” – based on the web series created by Chioke Nassor, this half-hour pilot follows three comedians who recreate personal stories by playing every character in their story in dreamlike reenactments. In between segments, the performers and a host sit at a roundtable dissecting and reacting to one another’s stories in front of a live audience.
–Untitled Kyle Dunnigan Project (script deal) – this script, set at a superhero academy, follows Kyle Dunnigan (“Inside Amy Schumer”) as a professor with unimpressive powers.
-“Awkwafina” (script deal) – half-hour scripted narrative that focuses on a heightened version of Nora Lum, better known as rapper Awkwafina, as she navigates the underground hip hop community in Queens.
–Best Seller” (script deal) – this script written by Nora Kirkpatrick and Dennis McNicholas, is set in the world of a third rate home shopping network. After the reigning queen of the channel is electrocuted on-air during a hair drying demonstration gone wrong, her three venomous power hungry disciples enter into a cutthroat competition for her coveted time slot.
–“Casey Vs.” (script deal) – Casey Jost one-ups “Man vs. Wild” in the most extreme survival guide ever made and teaches viewers how to handle everything from the zombie apocalypse to an alien invasion.
–“Delco Proper” (script deal) – based on the Comedy Central digital series, “Delco Proper” centers around a family owned lumber yard and its blue collar crew made up of hardworking locals who never left their hometown in Delaware County, PA.
–“Drunk Girl/High Guy” (script deal) – this Sarah Walker script follows the adventures of two best friends and work wife/work husband in New York City – a girl who is almost always drunk, and a guy who is almost always high.
–“East 89th” (script deal) – based on Sean Donnelly’s real life experiences centering around the dysfunctional doormen of a luxury high-rise building on East 89th Street in New York City.
–“GERP” (script deal) – Produced by Jack Black’s Electric Dynamite and co-written by Dick Blasucci (“Mad TV”) and Janine DeTullio (“Late Night wtih Jimmy Fallon”), this show within a show follows a federal worker who hosts a government produced variety TV show from inside his cubicle during the work day.
-“Legal-ish” (script deal) – written by Dave Storrs and Steve Mallory, follows a well-meaning slacker who finds himself on the jury bench of the longest-running case at his local courthouse.
–“New Timers” (script deal) – based on the Comedy Central Digital series, “New Timers” takes place following an apocalyptic “event.” Matt Porter and Charlie Hankin, who create, star, executive produce and direct the series, now live their day-to-day in what’s left of Brooklyn, looking for adventures, new friends and ways to pass the time.
-“Tijuana Beach” (script deal) – this animated project follows a Mexican American father who inherits a rundown resort from his uncle and relocates his family to Mexico.
–“Used People” (script deal) – based on the Comedy Central digital series written by Michelle Wolf and Dan Soder, “Used People” follows uptight Michelle and stoner Dan who spend their days arguing, obsessing over their messy personal lives and – theoretically – selling used cars.

We’re really excited to see The Goddamn Comedy Jam, Roast Battle, hour stand-up specials from Kurt Braunohler, Joe DeRosa, another one from Trevor Moore and Dan Soder, and what Jordan Klepper and Jessica Williams will do with their new deals.

Also, from the sound of Moshe Kasher and Rob Huebel’s pilots, we hope that they get to see the light of day past being a pilot.