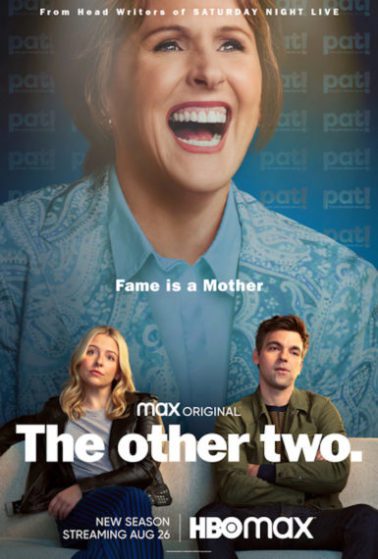 Get Your First Look at “The Other Two” Season 2

Though it received heaps of praise in its first season on Comedy Central, the road to the second season for The Other Two has been long and winding (and we’re sure a pandemic didn’t help with that either).

The acclaimed series following Drew Tarver and Heléne Yorke as the “other” family members of a successful showbiz family, like many acclaimed comedies that perhaps haven’t gotten their proper due, is now over at HBO Max.

Now having to deal with a superstar younger brother and mother, the long awaited next round of The Other Two is going to, so it would seem, give Molly Shannon another stellar role as a mother who is just simply too much.

See for yourself in the trailer here, then look for the premiere to stream on HBO Max on Aug. 26th.

Not only does writer/director Madeleine Olnek’s Wild Nights with Emily promise Molly Shannon (who is having quite the streak over the last few years we might add) to play the mysterious, yet legendary poet Emily Dickinson in a movie, but also bring Emily’s secret love life (via her private letters) to the big screen (and probably to your eyes and ears for the very first time).

This trailer looks very promising and continues the atypical period piece comedy tone that The Favourite did so well in 2018.

If you’re digging it, look for it in theaters starting April 12th.

May 18, 2018
Uncategorized
cord and tish, hbo, molly shannon, will ferrell

If you enjoyed Will Ferrell and Molly Shannon causing a ruckus at the Rose Parade earlier this year, they’ll be up to their hijinks yet again while covering the Royal Wedding via HBO at 7:45AM this Saturday, May 19th.

For our money, it’s a great reason to wake up early this Saturday and the best way to watch The Royal Wedding.

We’re going to go ahead and guess you didn’t wake up at 8AM PST to catch Will Ferrell and Molly Shannon bring some mischief to the venerable tradition of New Year’s Day Rose Parade.

Thankfully, the replay of Cord & Tish’s 2018 Rose Parade coverage is streaming for you at Amazon Prime. See it for yourself (if you have Amazon Prime) here.

Perhaps, this Jan. 1st, you might want to either pull an all nighter on New Year’s Eve or not get so hammered on champagne that you sleep through the morning.

That way, you can watch Will Ferrell and Molly Shannon, in character as Cord Hosenbeck and Tish Cattigan, bring some mischief to the time honored New Year’s Day tradition of the Rose Parade.

You’ll be able to watch their hijinks at 8AM PST live via Amazon Prime.

Here’s a taste of what’s up their sleeve. 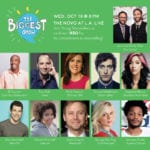 For just an ounce of hope in something and an opportunity to see what should be an unforgettable night of comedy, some of the brightest comedy stars on stage and screen will act out scripts written by fifth graders all in support of underserved youth arts organization, Young Storytellers.

If There’s One Dramedy Centered on Cancer That You See This Year, See Chris Kelly’s Other People

It may seem like a very niche genre, but a number of films that mix drama and comedy over the last few years do so by having cancer worked into the plot.

Chris Kelly’s Other People is one of the best films of its kind as its emotional peaks are so comedically high and valleys are so dramatically grounded, all in the best, life affirming way possible. Molly Shannon gives a performance of a lifetime and then some as well.

You should definitely go see Other People in select theaters while you still can or buy it on iTunes.

Chris Kelly, whose work you’ve probably seen on SNL and Broad City, is making what looks to be a stunning feature film debut about a freshly unemployed comedy writer coming home to take care of his sick mother with Other People.

Kelly wrote and directed the feature, which had a nice run on the festival circuit, and stars Jesse Plemons, Molly Shannon, Bradley Whitford, and Zach Woods.

See for yourself what the buzz for this dramedy is all about in this trailer, then look for it in theaters on September 9th.

Even if Aubrey Plaza is a Zombie, You’ll Still Love Her in ‘Life After Beth’ Trailer

Following the great high concept comedy Safety Not Guaranteed, Aubrey Plaza’s high concept comedy this year is one where she’s a zombie, but still in love with her boyfriend. In fact, she’s less a zombie and more like Aubrey Plaza with an appetite for humans. Dane DeHaan stars opposite her as the boyfriend in what might be a very memorable role and John C. Reilly and Molly Shannon co-star as parents supportive of a alive-dead relationship.

Watch the trailer here and get excited for a release sometime this Summer.

We’ve been saying over the last few weeks that Fox has been really killing it in terms of their comedy development slate, bringing in projects that already sound enticing to watch.

Well, this show that Molly Shannon will star in and produce, written by Kids in the Hall’s Bruce McCullouch who will also produce definitely falls into that category.