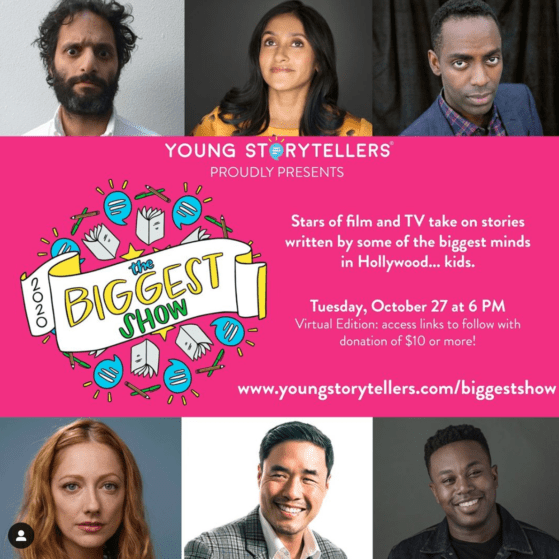 Pick of the Day: Young Storytellers Presents The Biggest Show 10/27

Even though they won’t get the gorgeous space of a venue like the Theatre at the Ace Hotel, Young Storytellers will still put on their annual, pull-out-all-the-stops evening, The Biggest Show, that combines your favorite actors and comedy folks with the best stories written by students in their program in benefit of Young Storytellers’ upcoming programs.

This year, they will be doing The Biggest Show virtually with a cast that’s just as biggest and wonderful as any other year. That’ll include Jason Mantzoukas, Aparna Nancherla, Baron Vaughn, Judy Greer, Marcel Spears, Randall Park, and Tony Hale.

This virtual edition of The Biggest Show is set for Tues. Oct. 27th at 6PM PT/9PM ET. Tickets to the live-stream come with a donation of $10 or more. Get access and support the lovely program that is Young Storytellers here.

The renowned darkly comedic Wilson by Daniel Clowes is being brought to life, or rather, to life within a film.

This film adaptation of Wilson was thankfully written by Clowes and directed by Craig Johnson. Look for it in theaters on March 24th, 2017.

This is dream casting as far as we’re concerned.

In this comedy pilot from Laura Steinel, Judy Greer will play the head of HR at a New Jersey based plastics molding plant (presumably something along the lines of what you might have seen in the movie Joy, but more above board) and have to deal with an idealistic new company head in Patton Oswalt.

This may sound a bit like The Office or Parks and Recreation, but set in a plastics. We’re totally fine with that, especially because Oswalt and Greer are starring.

Kitty Sanchez is finally in control of things.

Judy Greer has made a career off of being a comedic supporting actress, so much so that she wrote a book about it called I Don’t Know What You Know Me From.

Now, she’s going on to the directorial side of things with her first feature film as a director, “A Happening of Monumental Proportions”. Besides knowing that Allison Janney and Common will star and there will be dead bodies and sex at a school, there isn’t much else to go off of, but we’re more than intrigued to see what Greer comes up with.

Natasha Lyonne and Judy Greer play dysfunctional sisters who end up working together as maids that have to figure out what to do with a dead body all in Fresno, CA.

That’s an incredibly enticing premise for Addicted to Fresno, which shows promise in this trailer.

Also, take note of how Natasha Lyonne has really risen above American Pie from the last millennium and is kind of killing it right now.

As mentioned before, Judy Greer and Natasha Lyonne play co-dependent sisters trying to cover up an accidental murder, which already sounds like it could be good fun.

On top of that, Fred Armisen, Aubrey Plaza, Kumail Nanjiani, Jessica St. Clair, Molly Shannon, and Ron Livingston round out the cast and Karey Dornetto (whose written on many of your favorite shows including Portlandia and Arrested Development and South Park) wrote the script. So, you’ll probably want to check it out or, at the very least, be excited for a trailer.

Gravitas Ventures has acquired Addicted to Fresno for a fall release.

If this fares well, we’ll be curious to see if SXSW’s film line-up gets even more coveted and expanded next year a la Sundance. It wouldn’t be surprising if it happened, especially in regards to comedy since there’s a comedy portion of the festival already that has screened several comedies, both studio and indie.

Together, Greer and Lyonne be playing sisters and hotel maids that don’t get along as one is impulsive and the other is overly regimented. On top of that they have to clean up an accidental death that’s their fault, which could be a bunch fun with this duo, possibly the type of fun promised by 2008’s Sunshine Cleaning.

“Married” and “You’re The Worst” Premieres Tonight on FX

FX latest comedy series, Married, makes its series premiere tonight at 10PM. Nat Faxon and Judy Greer star as a married couple that really test the worst part of the wedding vow “for better or for worst”.

What might be interesting to note is that along with You’re The Worst from Stephen Falk (also premiering tonight), which shows an unlikely couple at the start of a relationship and Louie, FX has lined up an entire timeline of how dysfunctional relationships work.

FX’s newest comedy series, Married,premiering July 17th, just got a trailer that seems to be the sort of dark romantic/family comedy that we’re into. Nat Faxon and Judy Greer star along with guest appearances from the amazing Jenny Slate and John Hodgman.

So, watch the trailer here.

Judy Greer’s “I Don’t Know What You Know Me From: Confessions of a Co-star” Out Know

This week, Judy Greer, a literal co-star in almost everything from Arrested Development to The Descendants to Archer to The Hebrew Hammer and way more finally released her collection of essays, I Don’t Know What You Know Me From: Confessions of a Co-Star.

Hearing what it was like to play Kitty Sanchez would almost be good enough for a book, but there’s so much more, so you should pick it up and give it a read.

This is just another reminder that writer/director Jason Reitman gets stellar ensemble casts and will probably make something really special from it.

The high profile memoir of the amazing Judy Greer and an acting career so extensive from Arrested Development to rows of indie/romantic comedies to The Descendants that it inspired the title for all the time she’s had run-ins with confused fans is finally set to come out April 8th, 2014.

The cover, front and back, is pretty great too. See both at link at EW.com.

The delightful Judy Greer that you’ve enjoyed in anything from Arrested Development to Jeff Who Lives at Home and plenty more as a supporting actress (she’s writing a whole book about it) is finally getting a starring role in a FX comedy pilot.

We’re very intrigued to see what this will come to be.