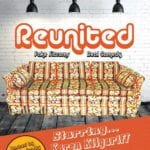 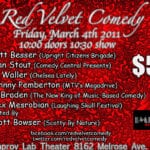 The Return of Red Velvet Comedy….

1) Jokes from the Underground @ The Hollywood Improv Lab is simply the start of something good.  Within the bounds of Hollywood where you can literally walk from one comedy venue to another, Jokes from the Underground manages to distinguish itself from just being another straight stand up show as one of the show’s producers Orlando Bishop told me that he wanted to have a show that no matter the circumstances, he and show producer/host Ed Greer would just enjoy the show themselves.  The idea of booking a live comedy show based actually on who is legitimately funny and who will actually entertain any audience is seemingly becoming one of those “novel ideas”.  Thus, there was a great variety of performers from all of the “sub-scenes” in comedy around LA county and beyond, which, as the show’s name suggests, proves that there are plenty of fantastic comics who don’t have a single TV credit that can “leave the place in a heap of dust” after their set.  With such integrity in putting a comedy show together, Orlando and Ed actually got people to fight through traffic, rain, Christmas parties to actually have an audience on this first edition of Jokes from the Underground, which made it for a splendid evening both as an audience member and as one of the performers.  Such a notion is yet another “novel concept”.  With host Ed Greer living up to his Twitter handle @EdGreerDestroys, the intimate crowd at the Improv Lab enjoyed the likes of Zach Ames, Gabbriella Gatto, Gail Gramlich, Scott Bowser, Orlando Bishop, Charles Allen, Plug McEnroe, Jake Kroeger (yeah, that’s me, if you haven’t figured that out by now), and Paul Danke.  It’s a line-up that shouldn’t be missed no matter how “underground” it is.  Jokes From the Underground will be on one Friday a month at the Hollywood Improv Lab 8:30PM $5.  Check back at the Comedy Bureau for details on the next one.

4) Trick in LA Times.  Seriously.  If you were expecting a “PSYCHE!” here, you obviously don’t know what Brandie Posey’s and Emily Maya Mills’ Trick @ Bordello Bar 8PM FREE has in store.  Read and find out WHY DON’T YA!?!

5) The Big Trouble in Little Tokyo Open Mic doesn’t take a holiday (mostly because we didn’t land on one).  Next Tuesday, we have a special guest performance in THE LOVELY AND UPROARIOUS MARIANNE SIERK!!!  Dec. 21st/Sign-up 6:30PM/Starts 7PM/Happy Hour until 9PM/You will FEEL empty for the rest of your life if you miss it/not really.

5) The Comedy Bureau “Tips Its Hat” today to EDDIE PEPITONE-“@eddiepepitone Greatest achievements- I once made a small lie into a crisis so big that I had to get plastic surgery done and relocate.”  Eddie is in consideration nearly every day for a “Tip of the Hat” and it’s no surprise why as he’s one of the funniest people I have ever seen, which is why this is his second “Tip of the Hat”.  From him yelling about people in Glendale to doing impressions of lounge singers that have Vietnam flashbacks, LA’s lucky to have Eddie Pepitone around.  SO GO CHECK HIS WEBSITE and please, please, please follow him on Twitter.

6) From the You Should Have Been There Lagoon: Doug Stanhope-This Generation Sucks

7) Wonder where the Comedy Bureau’s going to be? Follow us/me on Twitter because we don’t have a Comedy Bureau “Light” and if you want one, donate here.

8) Sorry fo any typos that you may read here.  In trying towrite and perform and do everything that you need to keep afloat in LA Comedy. I’minalittleofarush sometimes.  T’anks for reading.