As you may well know, much of comedy and the comedians in it have taken a hiatus or shifted to something else throughout the last year. Maybe they gave a crack at Zoom and decided to wait it out for the return to people gathering in tight, crowded, dimly lit places to watch stand-up.

The few that have opted to take on the challenge of doing live stand-up and, further than that, do an entire special have tried anything and everything that they could possibly think of while trying to not further the transmission of COVID-19. Drive-ins, no audience, doing it over Zoom, etc. (though no one seemed to try what Harland Williams’ did several years ago by doing stand-up all alone in the desert).

Comedy Dynamics tapped four comedians to drive-in specials that were shot live at the parking lot of the world famous Rose Bowl in Pasadena. Ester Steinberg was one of those four and truly rose to meet the challenge. She had to perform in front of a field of cars that often honked and flashed their headlights in appreciation (as laughter is often to hear while doing a drive-in show) as she taped her very first special, Burning Bush. In the entire history of comedy, no such endeavor had been undertaken because, well, it goes against so many best practices of live comedy (outside, people separate from each other, physical barrier to connecting to the crowd). Steinberg has had more than enough experience fiercely grabbing hold of the audience’s attention working the road and doing her own weekly room at the Kibitz Room at Canter’s that it’s no surprise that she made this experiment really work for her.

Keep in mind, at the point of the pandemic, almost no comedian had performed in person for six months. So, to have enough material to even do a special, care about said a material, gear up to do it, and then do it in front of cars like no other comedian has ever really done before is such an unbelievable feat. Again Ester’s command of the stage and her blend of clever observations and truthful vulnerability made her first hour sing, even under what are truly unfair circumstances.

See for yourself as Ester Steinberg; Burning Bush is now streaming on demand on Amazon and Apple. 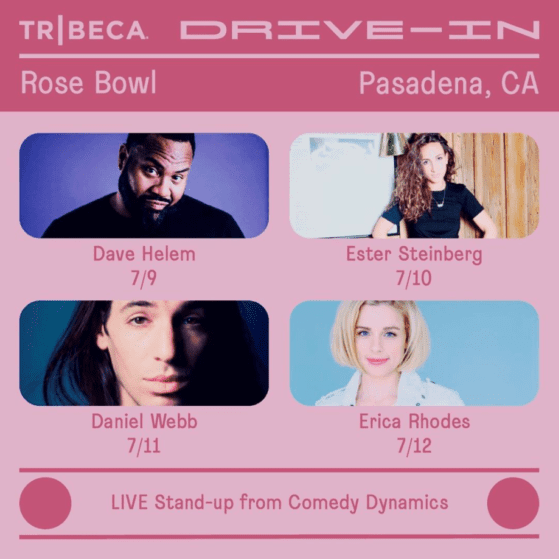 To try to even come up in comedy in both LA and NYC, you’ve got to have some sort of special gumption to you. Ester Steinberg has that sort of tireless work ethic, voice, comedic presence that demands to be heard and thus, successfully hopped between both cities while honing her stand-up chops.

Ester puts all of this nicely on display with her debut album Hebrew School Dropout. Dashing through a tour of her life of being a wild child to finding her very, very specific version of a perfect fiancé, she maintains a bouncy and bold energy the whole way through.

So, please go get and enjoy this first hour of Ester’s Hebrew School Dropout, available now here on Spotify, Apple Music, and iTunes. 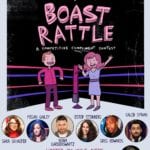 Well, do you want to hear something, anything at all positive? Sure sounds like a compliment contest might be the thing you need.

It just so happens that the monthly, always fantastic Boast Rattle is happening this Wednesday at Dynasty Typewriter and is sure to be an escape to funny life affirmations, (maybe slightly awkward) expressions of affection, and more. 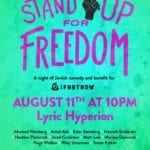 The show follows them around semi-reality style through the highs and lows of being a comedian that’s hustling to make it big while also including plenty of bits of actual stand-up.