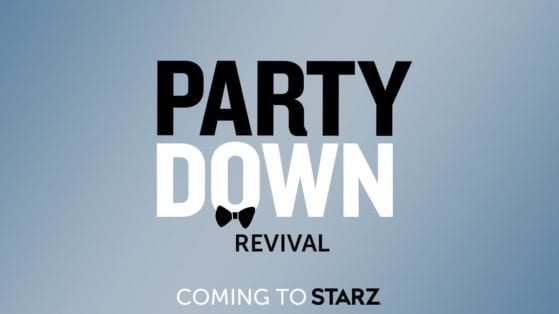 A Revival of Party Down Is In The Works at Starz

Henry’s torturous catch phrase “Are we having fun yet?” has been a sentiment that has been ringing in our head as capturing the spirit of remaining in lockdown because of the pandemic.

So, the idea of Party Down potentially returning is very much good news to us and, as far as revivals/reboots go via nostalgia bait, we’re fine with this one. If you haven’t watched Party Down yet, please stop singing the praises of Ted Lasso and go watch all of Party Down right now. There are only two seasons (and there indeed should have been more), so it ought to be a very satisfying binge.

Thus far, the original producing team of Rob Thomas, John Enbom, Paul Rudd and Dan Etheridge are committed to developing this possible revival at Starz and they’ve indicated that a good portion of the cast is likely to return (Adam Scott seems to be on board).

Perhaps, if this returns, we’ll have a better answer for the question, “Are we having fun yet?”

Take My Wife, Night Train with Wyatt Cenac, The UCB Show, Andy Richter’s Home for the Holidays, Sklar Brothers: Hipster Ghosts, Lachlan Patterson Live From Venice Beach, The Pistol Shrimps, Brian Posehn: Criminally Posehn and New York’s Funniest all just landed over at Starz and will be available on Starz’s own app and on-demand on May 1st.

Just in case you didn’t get around to watching anything on Seeso, there was a lot of innovative and fun stuff that was made and licensed over there. Hopefully, more people will come to realize that as they see Seeso shows and specials at other, more established networks and streaming platforms over the next year or so.

Just in Time for Halloween, Here’s a Teaser for Season 3 of Ash vs. Evil Dead

From the looks of it, there’s a whole new batch of fun deadites, fun one-liners, and a whole new part of Ash’s family for the new season of Ash vs. Evil Dead.

See for yourself in the season 3 teaser here.

Starz Renews Ash Vs. Evil Dead for a Third Season

Starz Renews Ash Vs. Evil Dead for a Third Season

If you were just looking for a sequel to Army of Darkness/Evil Dead, looks you got something way better.

Not that we’re surprised, but Starz seems to like having the horror-action-comedy Ash vs. Evil Dead around. Announced at NY Comic-Con this past weekend, a third season of the series has just been ordered up, which means that several hours of blood, guts, and Ash one-liners have been made and more are coming. A single sequel would only be two hours and change at best and who’s to say that a movie wouldn’t sprout of the newly revived franchise.

Season 2 of Both Ash vs. Evil Dead and Blunt Talk Premiere Tonight

Starz’s comedy line-up has had a good resurgence with this duo of Ash vs. Evil Dead and Blunt Talk.

Now, they’re going to play back-to-back in their second season premieres with Ash vs. Evil Dead kicking off the evening at 8PM and Blunt Talk right after at 8:30PM.

The most outlandish Sir Patrick Stewart that you’ve probably seen returns to television as season 2 of Starz’s Blunt Talk is set to premiere in October.

It’s awhile, but it just might be worth the wait.

For now, you’ll have to just see what they’ve got in store for Stewart as Walter Blunt with this teaser.

Ash vs. Evil Dead Season 2 Teaser Has Arrived with Plenty of Blood and Guts

The TV adaptation Ash vs Evil Dead might be one of the more successful film franchise-to-TV series adaptation that’s ever been seen.

So far, the first season was a great start and the teaser for season 2 looks like it’ll be headed further into the blood, guts, firepower, and one liners that fans, both old and new, have come to love.

Look for the premiere of season 2 of Ash vs. Evil Dead on Starz in October.

The Season Finale of “Ash vs. Evil Dead” Is Tonight

Season one of #AshvsEvilDead ends tonight. Think of it like the best first date ever. We gave you a hand and you saw a lot of action.

The end of this first season of Starz’s excellent revival/adaptation of the Evil Dead/Army of Darkness series is tonight.

If you’re already getting forlorn that you’ll not have any new Ash kicking deadite ass and dishing out one liners, remember that Ash vs. Evil Dead is already renewed for a second season.

Series Premiere of “Ash Vs. Evil Dead” Is Tonight

If you’ve been the type of person that’s just been quoting “Shop smart. Shop S-Mart!” and like carrying a boomstick around, tonight might be your night as Bruce Campbell returns to his legendary role as badass, Ash in Starz’s new series Ash vs. Evil Dead, appropriately on Halloween night.

If you don’t have Starz, now might be a good time to get it.

“Ash Vs. Evil Dead” Gets a Second Season Order Before Series Premiere

Don’t you just wish more series renewals were this quick?

Apparently, Ash vs. Evil Dead is tracking well enough before its series premiere this Saturday on Halloween that Starz felt it necessary to keep Bruce Campbell, his posse, and his boomstick alive beyond 10 episodes.

We hope such a sign of faith in the series should bode well for how great this first season of Ash vs. Evil Dead very well may be.

Here’s a New Trailer for “Ash vs. Evil Dead”

Ash vs. Evil Dead doesn’t premiere on Starz until Halloween, which is pretty much the perfect day for it’s premiere by the way.

Fortunately, there’s a new trailer with more one-liners and gore to tide you over until then. Watch it here.

The Series Premiere of “Blunt Talk” Is Tonight

Make sure you have Starz tonight.

With the forces of Jonathan Ames, Seth MacFarlane, and Sir Patrick Stewart combined, we will all get the darkly comedic cable news show Blunt Talk starting tonight at 9PM on Starz.

One of the best parts of this is that it doesn’t interfere with any of the four comedy specials also premiering tonight.

Starz Has Put Up The First Two Episodes of “Blunt Talk”

If you’ve really been pining to see more of the comedic Sir Patrick Stewart, you won’t have to wait around until next weekend.

However, Starz was nice enough to let us all preview two episodes a week before.

You can watch both of them right here.

Jonathan Ames and Seth MacFarlane’s Blunt Talk looks more and more like a much more fun version of The Newsroom that seems to have less rants and more of Sir Patrick Stewart really, really living it up.

Watch the latest trailer here, then watch the premiere on Aug. 22nd at 9PM on Starz.

The Trailer For “Ash vs. Evil Dead” Looks Like It Could As Much Fun as The Original Trilogy

This week, Comic-Con got a whole dose of Bruce Campbell returning to his former glory as the boomstick carrying, one-liner-at-the-ready Ash from Evil Dead, Army of Darkness, and Evil Dead II.

The new trailer for Ash vs. Evil Dead the Starz adaptation of the Sam Raimi-Campbell franchise was screened for those in attendance and is now online for all of us to enjoy with its badass, gory hilarity. It only stands to reason that Raimi and Campbell reuniting should conjure the same cult horror-comedy magic they did on the first go around.

Also, Lucy Lawless seems to be joining Campbell’s side, which is definitely a plus.

Watch the trailer here and then look for the series premiere on Starz on Halloween night, Oct. 31st at 9PM.

One of the more intriguing series to come down the pipeline from Starz has to be Blunt Talk, which has Sir Patrick Stewart take a comedic turn in a series created by Jonathan Ames and executive produced by Seth MacFarlane.

Startz has already ordered two seasons of the series last year, which makes it’s premiere more enticing than it already is. A teaser was just released to further tantalized us all.

Here’s the plot summary from IMDB:

British newscaster Walter Blunt [Patrick Stewart] comes to Los Angeles, intent on conquering the world of American cable TV. Through the platform of a nightly interview show, Blunt is on a mission to impart his wisdom and guidance on how Americans should live, think and behave. Unfortunately, Blunt is constantly harassed by interfering network bosses, a dysfunctional news staff, and his numerous ex-wives and children. Blunt must now deal with the fallout from his well-intended but misguided actions, both on and off the air, with only an alcoholic manservant at his side.

So, we’re thinking this falls somewhere in the realm of The Newsroom meets Veep and thus we’ll be looking excitedly for a full trailer, hopefully soon.

So, it turns out that the Army of Darkness sequel that Bruce Campbell and Sam Raimi were working on, is ending up as a series on Starz.

Bruce Campbell as Ash, Sam Raimi, and his boomstick are all set to return in 2015 to follow up after where Army of Darkness left off.

This series adaptation of Evil Dead franchise along with Jonathan Ames-Seth MacFarlane’s Blunt Talk starring Patrick Stewart will be two very good reasons to tune into Starz next year.

Starz is slowly, but surely building up their comedy slate. Having two seasons of a live action comedy created by Jonathan Ames of Bored to Death fame and Seth MacFarlane executive producing is a good start.

An even better start is having that series star Patrick Stewart as an almost Ron Burgundy-esque character. With everything that this series, Blunt Talk, has going for it, it will be highly anticipated all the way until its 2015 premiere.

It’s been quite some time since Party Down, but Starz might be getting back into the comedy game with Doug Liman who you might know, comedy wise, from Swingers and Go.

While Doug Liman is more action oriented, it’s good that offbeat romantic dramedy is where Starz is staying genre wise.

One of them is Hollywood Acting Studio featuring the always funny Drew Droege as one of the worst acting classes ever/a normal acting class in Hollywood. Watch it here and watch for more, as there surely will be more coming, Union Pool soon.