We’re not usually in the business of recommending comedy classes here at TCB, but John Roy’s Entirely Free Comedy Class is something special and unique that is truly helpful for those in stand-up comedy. It has helped those doing their first mics all the way to headliners who already have a very successful career in comedy.

The course itself is self-guided with several lessons over several weeks that really let you develop to being whatever you really want to do in stand-up. Roy, who is an accomplished stand-up himself between albums, late night, touring etc., just revised, which is a great excuse for us to shine another light on it.

Get into the first week of Revised John Roy’s Entirely Free Comedy Class and follow along here.

Win Tickets to the First Hot Tub of 2018

OK, Jan. 1st didn’t really kick off the year because Hot Tub with Kurt & Kristen hadn’t yet started back up.

However, on Jan. 8th, the year 2018 will really get underway with the 1st Hot Tub at The Virgil.

Even better than that, we have tickets for you to win!

While the title is timely, John Roy handcrafted a pretty sweet hour with his latest album Everything’s Burning.

Roy’s pinpoint observations on the world and himself are distilled to their purest essence and dripped for all their worth. Also, John’s execution is, as it has been for quite some time, flawless as well.

This album, if anything, gives a nice break from seeing everything burning. Get a taste of it here.

Get Everything’s Burning from AST Records as a poster by the amazing Barry Blankenship w/download code or on iTunes. 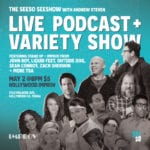 John Roy Returns in Pretty Much The Same, If Not The Exact Same, Outfit  to Conan and Crushes

John Roy took the stage at Conan for a great set in 2012 with a dark hoodie and a red t-shirt.

Three years later, he did pretty much the same thing with what looks to be the same hoodie and t-shirt combo and another great set. Maybe he’ll make it a tradition?

Watch this latest and greatest set from John Roy here.

Bernie Sanders Is Not Boring

James Adomian wants to prove beyond 100% of at least 70% of a doubt that 73 year old U.S. Senator Bernie Sanders, currently running for President, is not a boring guy and completely deserves the votes of 30% of the younger demographic that’s 85% outside his current constituency.

A couple of months ago, we caught wind of the awesome podcast collective known as Feral Audio recording a live album featuring performances from the various hosts of their shows.

Today, we’re more than happy to not only find that the album Feral Audio LIVE has come out, but that it’s also available as a special so you can watch what went down at Nerdmelt several weeks ago.

To our knowledge, no podcast network has gone to record a live album of its roster of podcasts.

Podcast history is going to be made on August 5th 9PM and you should get your tickets now.

There are many sources where comedians get their material. None are as rich as the time when they went to high school. That’s why John Roy (you might recognize him from his newly released album Alexander Hamilton, which you should pick up) specifically digs into that with his brand new podcast just launched at Feral Audio, Don’t Ever Change.

Give it a listen, especially as the first guest is the hysterical Sean Patton who has plenty that he has dug from his years in HS.

The shrewd and hilarious John Roy just released his next comedy album. Alexander Hamilton is now available to purchase as a digital download or as a physical CD with a bonus track and enjoy time and again like we predict you will.

Pick up a copy at AST Records now.

Not only are we excited that John Roy is coming out with another comedy album, but we’re even more excited that you’ll have a chance to get bonus tracks that were taped post album recording if you buy the CD version instead of the digital download.

Either way, mark Tues. Aug. 6th on your calendars for Roy’s Alexander Hamilton to come out.

Feral Audio is bringing another very intriguing podcast with comedian John Roy’s Don’t Ever Change. It’s a podcast where the very funny Roy interviews other very funny people like Sean Patton, James Adomian, Jay Larson, and more and the towns where they came from, grew up in, and how they affected them in such a way that they’ve become the, as said above, very funny people they are now.

Don’t Ever Change is scheduled to come out at the end of this month, but we’ll get you more details when it comes out.

This is the final “class” of John Roy’s free of charge online stand-up comedy course. It’s been a great set of lessons in stand-up that Roy, both a very funny comedian who has definitely put his time in as a full time working stand-up, is offering for all, whether you’re going full bore into comedy or casually interested in it minus the hundreds of dollars you’d spend at a class if that was what you were looking to do.

And, if you haven’t been keeping up with it, here’s the other 11:

From the comedic genius of James Adomian and John Roy, IFC/Funny or Die brings us Maron In Space with comedian and comedy podcast giant Marc Maron (played by the amazing James Adomian) as the more honest, raw space captain you’ve ever seen. Also, this is the first time you’ll get to see plaid in space as well as evil Maron vs Maron (or the other way around?).

There’s plenty of hate on stand-up comedy classes, especially for the money they cost that ultimately will not let you skip open mics, but hilarious, veteran comedian John Roy (you’ve might have seen him be great on Conan or his AST Record taping) has thankfully circumvented the cost leaving just valuable lessons in starting out in stand-up comedy.

Over the last month or so, he has been writing what would basically make up the text book for a comedy class and posting it on his Tumblr weekly. This still won’t let you skip open mics, but it’s great advice from a great comedian that you can take at your own pace and you didn’t pay a month’s rent for, so you might want to check it out if you’re interested in trying/doing stand-up.