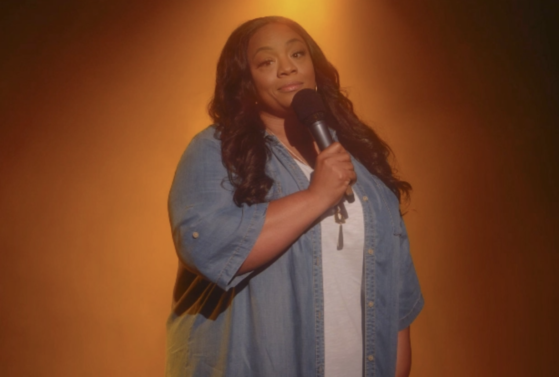 Ms. Pat has lived through so much life that she could probably do several hours/solo shows/etc. and they’d all be captivating. Yet, it’s 2021 that’s proving to be a banner year for Ms. Pat as she has already gotten a lot more radars with The Ms. Pat Show and Netflix just announced today that she will be given her hour long stand-up special by the streaming giant.

If you’ve seen her do stand-up, listened to The Patdown, or heard/seen any sort of public appearance of hers, you’d know that an hour long Ms. Pat special was overdue. Her effortlessly unflinching and hilarious honesty about her past life dealing drugs and current life with all of that behind her make for some of the best stories we’ve ever heard on stage.

The hour long special ought to be chock full of such tales that will very likely feel tall, but are, most probably, very, very true.

The taping of Ms. Pat’s first hour special will tape at Atlanta Comedy Theater on Sept. 25 in case you’re in GA at the end of next month.

“ive been playing 50-100 seat rooms all over the country, working on an hr about sexual assault as a survivor

Last week we shot the hr in LA

For a comedy special, this is an incredibly quick turnaround.

However, we have a feeling that this special is one that needs to be watched by any and all ASAP on top of funding an important cause as quickly as it can.

So, it should go without saying that you need to mark June 11th on your calendars.

Former Late Late Show host Craig Ferguson has spent a good deal of his career on a television in a finely tailored suit.

Now, since it has been years since he left that gig, Craig can really ease into a look all his own with an unbuttoned short sleeve shirt and Chuck Taylors for his new hour special coming to Netflix, Tickle Fight. Also, you can see that he’s quite a fan of tattoos as well, which might leave you wondering what sort of guy used to host The Late Late Show (for our money he was one of the best interviewers in late night)

Earlier this year, Jerrod Carmichael’s 2nd HBO stand-up special, 8, premiered and offered up the unique hour that we always knew Jerrod was capable of.

Bo Burnham also brings a great look and rhythm (there are a lots of great dramatic pauses) as he joined on as the director for 8.

If you don’t have HBO in any way, shape, or form, you can now download a copy from Google Play to enjoy 8.

In fact, we’ve got a digital copy to give away to our loyal readers. E-mail thecomedybureau@gmail.com to enter to win.

Michelle Wolf, who you’ve probably seen rise from being a great stand-up to Late Night with Seth Meyers to The Daily Show with Trevor Noah, is now making her way to an hour long HBO stand-up special.

Between HBO, Netflix, Comedy Central, Showtime, and Seeso, you can now definitely see each network building up their reserves of comedy specials that they exclusively own and HBO made a pretty solid choice with Wolf.

It’ll tape this summer on Saturday, August 12th at NYC’s Skirball Center and the one and only Neal Brennan will be directing.

Here’s a recent set of Wolf performing in the UK at Live at the Apollo as a bit of a preview of what’s to come.

Going into Thanksgiving is going to be dicey this year. We’d say skip if you can.

Whether that’s possible or not, at least you’ll have a Michael Che stand-up special to look forward to.

Here’s the trailer for Michael Che Matters. It starts streaming on Netflix on November 25th.

The latest hour of stand-up to come from the one of the best comedians of our time, Kyle Kinane, is having its world premiere tonight. So, wherever you are, we’d hope that you tune in because Kinane’s stand-up is probably better than whatever else you have going on.

One of the sticking points of marriage that probably doesn’t get brought up enough is the one of a wife automatically taking her husband’s last name, leaving her last name out in the cold.

Fortunately, Nikki Glaser perfectly shines a light on the issue in her new hour Comedy Central special “Perfect” and illustrates how little we collectively regard a maiden name.

Oh yeah, you should definitely watch Perfect when it premieres on Saturday, April 9 at 11PM on Comedy Central. It’s damn good.

These specials will be from Chris Hardwick, Nikki Glaser, Rachel Feinstein, and Daniel Tosh.

You’ll be able to stream it on Comedy Central app and cc.com the next day after they air and an uncut, extended version will be available the following Tuesday across several digital platforms.

1) Norm MacDonald’s new hour long Comedy Central Special has moved from this weekend to Saturday March 26th at 11:30PM.  This should make up for Charlie Sheen stealing Norm’s Twitter thunder.

3) The Nerdist Theater at Meltdown Comics… WHAT?!? Follow @nerdmelt down the comedy nerd rabbit hole to see some of the best comedy shows in LA.

4) Comedian Jesse Case explores the future of indie/alt comedy via what happened indie/alt music. READ IT. IT’S GOOD FOR YOU. [via Antithesis Comedy]

5) So all this Doug Stanhope buzz has recently come about because he’s releasing a new album called Oslo: Burning Bridges to Nowhere.  Of course, this veritable wave of Stanhope is really all out-of-nowhere as it happened in Oslo and not anywhere near here, but hopefully the album’s release and distribution will change that.

6) Can’t get enough Action Figure Therapy?  Why not get a shirt to show your pride in watching the youtube series sensation?  That’s a thing that people do, right?