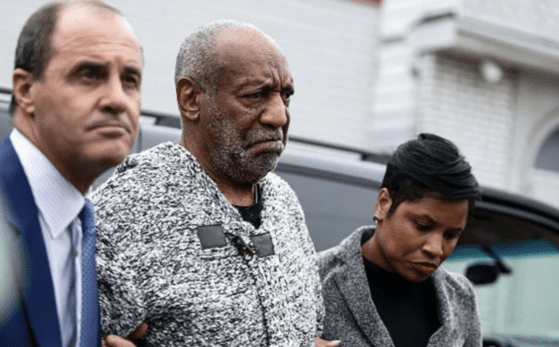 Though disgraced, yet freed comedian/actor/former beloved father figure Bill Cosby has his sights set on gaining back some of the real estate of his massive career, he is thankfully being met with plenty of stern resistance. Cosby plans on taking the stage again and attempting to get former projects off the ground, but there are no current takers willing to give him a mic (at least, that we know of yet) and virtually everything he was working on before he took the stand years ago has vanished.

One of those projects was a documentary being put forth by Lionsgate, which has been killed by the studio, reportedly, as of this week. Since the U.S. legal system still contains so many loopholes that it can’t hold monsters like Cosby accountable (keep in mind, he was still found guilty, but got freed off of a technicality off of a deal regarding his own testimony), it is going to be on the public at large to get the job done.

With that said, there’s a separate docu-series from one Michelle Major on Cosby that is nearing completion, but, thus far, it hasn’t secured any guarantee of distribution anywhere. If it ever does find a place to be shown, we can only hope it gets buried like Louis C.K.’s “I Love You, Daddy”.

If we hold up our end of keeping Cosby accountable, perhaps that would spell out a better, safer future where celebrity would not be allowed to perpetuate systemic sexual violence no matter how revered they are.

Most Likely To Murder, a Raunchy Modern Screwball Comedy Thriller, Out Now on Digital Platforms, VOD, and DVD

Though you may have not known that you’d want some sort of cross between Rear Window and an episode of It’s Always Sunny in Philadelphia (with a sprinkling of Young Adult on top), it’s what indie comedy Most Likely To Murder so deliciously serves up for you to enjoy.

It’s a unique murder mystery as it’s so laugh-out-loud funny throughout, but also so engrossing to follow and enjoy Adam Pally as a very, very amateur sleuth and getting his comeuppance at almost every turn. A great supporting cast in Rachel Bloom, Doug Mand (Most Likely to Murder’s co-writer), and Vincent Kartheiser play off of Pally’s disgraced former HS king come home so well from so many different angles. Also, props to co-writer/director Dan Gregor for oh so slightly toeing the line between having a plethora of physical comedy set pieces and just enough thriller elements to keep the audiences on its toes.

You can now get Most Likely to Murder digitally, on demand, or on DVD, which we highly recommend, here.

Dan Gregor and Doug Mand wrote and produced what ought to be a great start under Lionsgate’s new production arm Studio L.

On May 1st, this noir-style comedy with Bloom, Pally, and Kartheiser that is targeted at millennials, will roll out digitally.

All of this, including the cast, genre, release strategy, has our curiosity peaked very high and we’ll definitely be keeping a close eye out for a trailer.

Slowly but surely, The Big Sick has been rolling out in theaters across America over the last few weeks.

It indeed is one of the best movies of the years, certainly one of the best romantic comedies this side of the 21st century. Also, if you’ve been following the film’s star and co-writer Kumail Nanjiani on Twitter, you’ve seen that the film has been touching to so many different kinds of people in so many wondrous ways.

So, go see it/go see it again in a theater that’s now probably very close to you.

Just For Laughs and Kevin Hart are holding a short film contest called “Eat My Shorts” that will not only have 5 films screen at the one and only JFL Montreal Comedy Festival in July, but have one filmmaker/team get a development deal through the LOL website/app.

Submission rules/guidelines:
-They’re looking for films that speak to diverse, multicultural, millennial audience
-Total running time must be no less than 3 nor more than 22 minutes in length (including credits)
-All languages will be accepted but subtitles must be in English
-Submission deadline is May 13th.

Best of all, there’s no purchase necessary to enter or win.

There are few details outside of American satire institution The Onion will be developing three films at Lionsgate.

That being said, so many of their headlines over the years could serve as loglines for more than just three movies.

Though the plans for a talk show via Tribune Media fell through, Craig Ferguson might on to greener pastures as he has just signed an overall deal to develop series for Lionsgate Television.

Here’s to hoping that one of those series is one focused on the crime solving duo of Ferguson and Geoff Peterson.

Apparently, art thievery, Nazi gold, comedy, and Johnny Depp aren’t enough to convince Lionsgate to stick to their original release date for Mortdecai. The weekend they originally had planned on, Feb. 6th, would put Mortdecai up against the sci-fi epic Jupiter Ascending.

Now, Mortdecai will roll out on Jan. 23rd, two weeks early to the chagrin of art theft comedy/Johnny Depp fans.

It’s true that a full fledged movie studio is getting behind the guys who made the short film Eagles Are Turning People Into Horses.

Lionsgate is in development with Brian McElhaney and Nick Kocher better known as BriTANick to make a feature length film.

We know this probably won’t happen, but it would be pretty great if they adapted Eagles Are Turning People Into Horses into a two and a half hour epic.