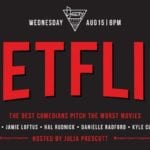 Rather than wait for comedy folks to make fun of a bad movie that finds its way to your local multiplex, come watch them dream up something that’s so bad that it’s funny (and, of course, subsequently reveling in how bad/stereotypical/derivative/hack it is) at the new live comedy show Setflix.

Looking at this line-up, which includes a longtime member of Screen Junkies and a co-host of The Bechdel Cast along with a co-host of The Simpsons podcast Everything’s Coming Up Podcast, we’re pretty sure you going to hear some “best/worst” movie pitches.

Setflix will happen at Dynasty Typewriter on Wednesday, August 15th at 8PM. Tickets are $10 in advance and $15 at door. Get them in advance here.

Watch the Melodrama of The OC Meet Westerns in “Townies”

Though you may have never thought of a Venn diagram where fans of teen drama and Westerns might overlap, Julia Prescott’s Townies realizes a world where the twain will meet in a fun genre mash-up.

Also, folks that we really want you to see more of, Natalie Palamides, Josh Androsky, Brodie Reed, Dave Child and John Ennis, star in the series.

If you’re digging all of this, you can stream all six episodes of Townies on Wednesday, January 24th on the mobile streaming app, Blackpills.

One would think that with 26-season-and-counting run and a cemented status as a legendary show, not just within the animated comedy genre, but among the entire TV canon, The Simpsons would have be the spark behind more podcasts.

After all, we can’t even count how many podcasts there are about just professional wrestling.

We could only find a couple of random Simpsons focused podcast before today.

Luckily, Simpsons superfans and comedians Allie Goertz and Julia Prescott have started the Everything’s Coming Up Podcast where they will chat with comics, writers, animators etc. about their favorite episode of The Simpsons.

1) Everyone’s A Comedian:  Comedy Is Hard.  So, Why Is Everyone Doing It On The Internet? for Internet Week in NY [via SoMuchFunItHurts] w/Judah Friedlander, Michael Ian Black, Sara Benincasa, Alf Lamont, and moderator Sean McCarthy.

3) Hello Giggles gets written up in Forbes.

4) Julia Prescott Interview with the Humourdor.

7) Barb & Whitney Blackout: Do You Want To Go Upstairs? NOTE: Watching this is a great way to start your Thursday.

9) Jesse Miller of the Jesse Miller Talk Show goes to ICM in NY.  Make sure to take notes on how to introduce yourself at management companies.

13) If you’re an audience member at a comedy show and you’re debating whether or not to tell a comedian they were funny because you’re shy, tell them they’re funny.  We keep count of compliments after shows like college football stars do with stickers on their helmets.

1) Yet again, it’s the Montreal Just For Laughs Showcase CALLBACKS!!! More updates will come as I receive them.

2) Chris Elliott on Conan can only mean some hilarious madness as the brand new series Eagleheart on Adultswim starring Chris Elliott is produced by Conan O’Brien, so tune in at 11PM to TBS.

3) Though it was a relatively small turn out, The Big Trouble in Little Tokyo Open Mic was still a WHOLE BUNCH of fun and most people who made the trek out seemed to have a good/productive night as well as catch Hasan Minhaj and Sean Conroy do what they do best, making people laugh (though Conroy is quite the free style rapper).  I hope to see all of you, AND I MEAN ALL, next Tuesday with Ron Lynch and Heather Thomson.

4) Congratulations to one Julia Prescott, a wonderful member of and a comic within the LA comedy community, on her new writing gig for MAD at Cartoon Network.

7) Recently: Russia might choose Santa Claus as their mascot for the Winter Olympics.  I think they should in an attempt to better relations with the U.S. have their mascot be Johnny Pemberton as a Tea Bagger.

8) I witnessed comics voting UNANIMOUSLY to do less time at an open mic.  I’m still trying to process this.