Thus far this award season, it appeared as though, yet again, comedy films weren’t going to get much of a nod (as is always sort of the case).

JoJo Rabbit might be an exception to this notion for how much critical acclaim on all fronts that it has been getting, but Booksmart garnering a Writers Guild nomination is a very pleasant surprise. Booksmart should have been a bigger hit and we can only hope that it lives on to be enjoyed again and again over the years for how sincerely refreshing and satisfying and hopeful it was.

Truly, we love both films (they both made our 100 Best of 2019 list) and hope that they fare as well as they can against the likes of Parasite, Joker, Knives Out, and more. 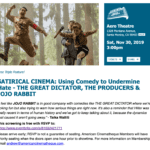 Basically, you’ll get to watch JoJo Rabbit, Charlie Chaplin’s The Dictator, and Mel Brooks’ The Producers, three satirical comedy classics for FREE (so long as you RSVP*) this Saturday at Santa Monica’s Aero Theatre.

This is a no-brainer to go to (especially if you haven’t seen all of these), right? Get more details, RSVP, etc. here.

*Please arrive early; RSVP is not a guarantee of seating. American Cinematheque Members will have priority seating when the doors open one hour prior to showtime. For more information on Membership, email andrew@americancinematheque.com.

Jojo Rabbit Is a Great, Definitive Piece of Satire for 2019 and Cements Waititi’s Legacy as an Auteur

Even though you probably are well aware of JoJo Rabbit’s premise of a fledgling Nazi Youth, who has a goofy Hitler as an imaginary friend, having to confront the inherent flaws in his ideology and its branding as an “anti-hate satire” (and that they’ll be playing David Bowie’s Heroes at some point), Taika Waititi still manages to delight, surprise, pull your heart strings oh-so-tight, have you double over laugh, and question your own biases and tolerances with his latest film.

Waititi makes a very effective piece of satire (almost Jonathan Swift-life in concept) for our times and also manages to be both edgy and uplifting at the same time. Such a range might actually be his signature style as an aforementioned auteur and wonderfully singular voice in comedy when all is said and done. Hunt for the Wilderpeople, What We Do in Shadows, Thor: Ragnarok and now JoJo Rabbit do make for a damn fine resume.

Also, the whole cast, Roman Griffin Davis, Scarlett Johansson, Taika, Thomasin McKenzie, and Sam Rockwell put on performances that will definitely stand out (as they balance Waititi’s sense of play and the horror of the Third Reich in WWII) in the breadth of their filmographies, which are already pretty impressive as is.

JoJo Rabbit is in now playing and you can (and should) get tickets for a theater near you.

When first hearing about Taika Waititi’s project where a kid has Hitler as an imaginary friend, one had to wonder what exactly the celebrated writer/director/actor had up his sleeve (especially in these days where white supremacy seems to be on the rise again).

That being said, over years over great pieces of cinema, we should have faith that Waititi would deliver something special. From the looks of the just released full trailer for JoJo Rabbit, Waititi might be delivering his most poignant work yet. Thus far, it appears to be a sharply crafted satire that follows why being a Nazi is bad from the perspective caught up in the Nazi Youth, but still full of Waititi’s trademark playful sense of irony.

See for yourself in the trailer here, then look for JoJo Rabbit’s theatrical release on Oct. 18th.