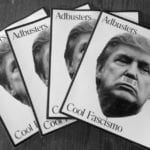 A round of applause for magazine Adbusters and their latest cover.

The History channel is really making a point to inject comedy into their line-up in 2016. This includes a compilation of short form shows including, Great Minds with Dan Harmon, Crossroads of History, and How to Lose the Presidency, which will be called Night Class and be their latest comedy offering.

Here’s a pretty great teaser for Crossroads of History, a third of Night Class, where Josh Fadem plays Hitler in his days as an artist that never really seemed to go all that well for him.

Night Class premieres this Thurs. Feb. 25th at 11:30PM on the History channel.

One of the best alternative history WWII action comedy series around, Danger 5 is finally available here in America via Hulu. Even outside of that incredibly specific sub genre, it’s fantastic.

How fantastic? Well, try a WWII where Hitler has dinosaurs and diamond soldiers.

Last night on Late Night with Seth Meyers, Gary Gulman shows how great word choice can be when doing stand-up, especially when it comes to talking about Hitler, the Jews, and God.

Whether it’s surprising to you or not, traveling back in time to stop Hitler is something is joked about quite a bit in comedy. However, this bit from Myq Kaplan on his Conan set from last night is the best we’ve ever heard.