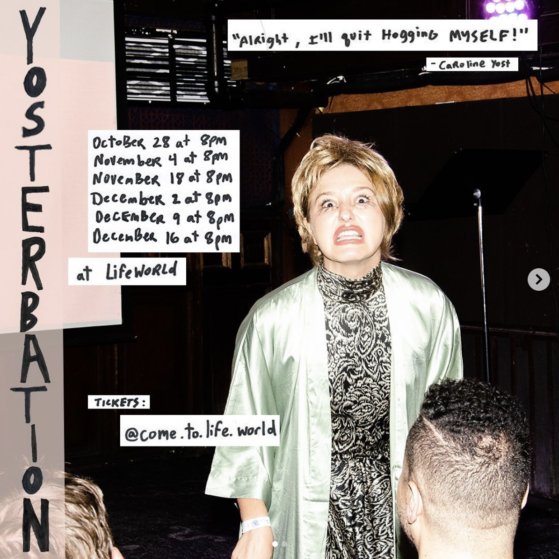 Seeing someone develop an hour or a solo show can be one of the more rewarding things in the live comedy going experience. The ephemeral nature of newly forged jokes, bits, pieces, etc. for an hour of comedy solo on stage gives a certain urgency that can often be electric (and it’s often what we hope to see when we’re watching comedy these days).

Also, on the other hand, it’s pretty great seeing really funny people do shows live and in-person. Whichever school of thought you want to fall in line with, you definitely should catch Caroline Yost of the amazing NYC comedy group Ladies Who Ranch develop a solo show in the very hip, very hidden Life World in Gowanus in Brooklyn. Yost is such an absurdly fun force to watch on stage and it’s definitely worth you going to any one of the six shows she has lined-up starting this week.

Schedule and special guests are as follows:

All shows are at 8PM ET (doors 7:30PM ET) and tickets are only $11 (proof of vaccination required). Go RSVP and snag your tickets here. 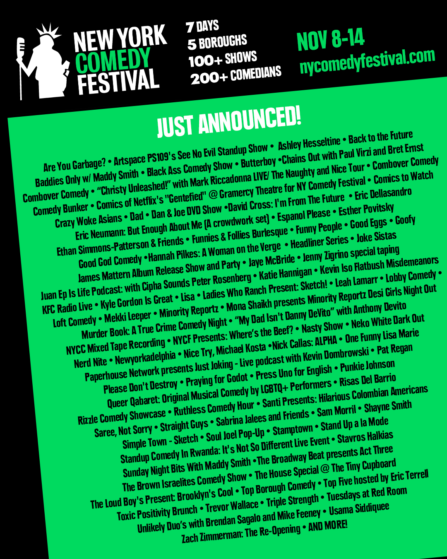 It’s that time of year and we’re on this side of the pandemic, so get ready for the annual New York Comedy Festival to roar through the NY comedy scene once more with a a cornucopia of comedy throughout all five boroughs, through clubs, theaters, indie venues, and more with comedians from even corner of the art form.

Whether it be Colin Quinn or Please Don’t Destroy or Sydnee Washington or Stamptown or Jenny Zigrino taping her special or David Cross or Esther Povitsky or Butterboy or Mekki Leeper or Dynasty Typewriter @ The Bell House or Hannah Pilkes or Sabrina Jalees or Murder Book: A True Crime Comedy Night, the New York Comedy Festival is aiming to be back at full strength in taking over the city from Mon. Nov. 8th-Sun. Nov. 14th.

Take a full gander at the massive schedule and line-up and go get tickets here. 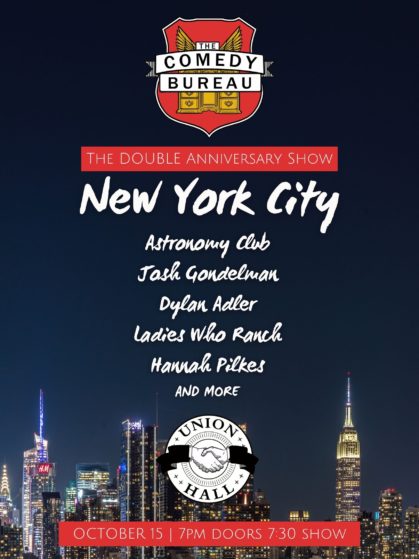 Even though we’ve only officially covered NYC comedy for a couple of months, there is so much about comedy in New York that we truly, deeply champion.

So, with that in mind, we wanted to do a portrait of NYC comedy for this very special Double Anniversary Show of The Comedy Bureau, marking both the 10th and 11th years of TCB (since we didn’t do any celebrating in 2020). Note, there will be a LA anniversary show on 10/25 at the shiny and new comedy venue, The Elysian.

With the help of the marvelous Carly Hoogendyk, we have such a colorful, lovely portrait indeed of NYC comedy (that has NYC stalwarts and brand new transplants) including:

That’s right, we’re not just doing a stand-up show, we’re trying to highlight all of NYC (just like we’ve done in LA for years). We would love if you came just to see your amazing faces (or part of them, anyway) and marvel how long we’ve been keeping the lights on TCB on.

We absolutely can’t wait to bring all these hysterical folks on to the Union Hall stage on Fri. Oct. 15th at 7:30PM ET. Tickets are $10 right now and $15 at the door (proof of vaccination required, of course). Snag ’em here. 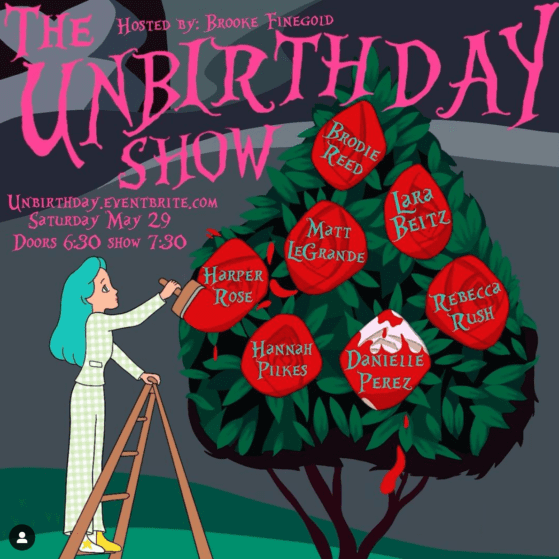 The Unbirthday Show is the latest show taking up the mantle in the grand LA comedy tradition of backyard comedy. Yes, the LA comedy scene has been doing outdoor comedy way before we had to (you best bet that we take advantage of the weather out here).

Curated, produced, and hosted by Brooke Finegold, she dresses up a Silverlake backyard for a fun, fantastical comedy show full of LA favorites and up and coming stars. This latest edition of The Unbirthday Show is set for Sat. May 29th at 7:30PM PT (Doors 6:30PM) and has quite the fine line-up of: