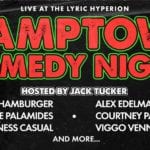 Many of the most decorated and celebrated performers of the renowned Edinburgh Fringe Festival and Melbourne International Comedy Festival will gather under the wondrous roof of the Lyric Hyperion for one hell of a night of internationally award winning comedy, Stamptown Comedy Night, of clowning, characters, stand-up, and so much more.

Just look and marvel at that line-up up there in the poster. Zach Zucker will even be presiding over the evening as his clown-inspired ideation of a stand-up, Jack Tucker.

So, don’t miss out on Stamptown Comedy Night, happening Fri. Oct. 11th at 10PM. Tickets are $15 and you can (and very much should) get them here.