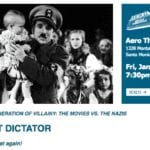 Seems like a nice way to finish off January 20th.

TCM (that’s Turner Classic Movies for all you cord cutters out there) will be screening over 50 movies that celebrate the art of slapstick comedy in film. The likes of Charlie Chaplin, Buster Keaton, Harold Lloyd, Will Ferrell, and more will be featured in this tribute showcase that will be hosted by comedian and cinephile extraordinaire Greg Proops.

On top of all of that, there’s a free online class that will offer up the history of as well how to do slapstick comedy.

Ouch! A Salute to Slapstick starts on Tuesday, September 6th on TCM.

We are excited to announce that @amyschumer will be honored at this year’s #Britannias! pic.twitter.com/YJ0tRtNfEQ

It’s already been a banner year for Schumer and we guess we have to make that banner a little bit bigger.

Though being known for his physical comedy that relied on a few title cards cut in between shots, silent film comedy legend Charlie Chaplin wrote as well.
Floodlights is this very novel by Chaplin, leaning towards being autobiographical for how it apparently focuses on a life of a comedian, probably the first book of its kind and will only now be published later this year.

The British Academy of Film and Television Arts in Los Angeles is bestowing their highest honor in comedy to none other Sacha Baron Cohen.

As Cohen is definitely a star of this latest era of comedy, you might be tempted to think such a distinction might be a little premature, but do realize that Ali G was on the air 15 years ago.