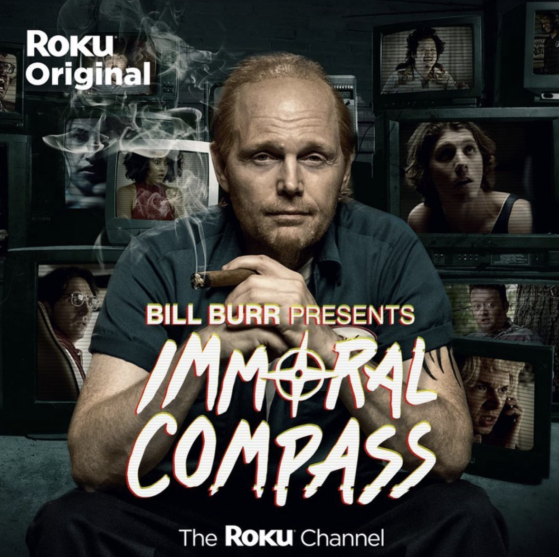 Roku, the home to Quibi originals, is now putting out there very own original content exclusive to their platform. For our money, they swung pretty well for their first series as they’ve got Bill Burr starring and presenting an anthology series (as if Burr is the Crypt Keeper from Tales from the Crypt, but just a jaded guy in a garage instead) that lives up to the title of the show, Immoral Compass.

Created by Tyler Falbo, Burr guides as a probably reliable narrator through what seems to be like a darker (and more cohesive) version of The Premise. Al Madrigal, Nick Swardson, Vince Vaughn, and Bobby Lee all make guest appearances and be terrified to varying degrees in their respective episodes.

Get a gander of what’s in store with Immoral Compass here with the official trailer, then, if you’re digging it, you can go watch it on The Roku Channel right now.

Haddish, Lee, and Hardwick will all get to sing their hearts out after telling the story behind their tune on Comedy Central’s brand new show, The Comedy Jam created by Josh Adam Meyers.

Catch the series premiere of The Comedy Jam at 10PM.

Fahim Anwar has climbed his way up the stand-up comedy ladder over the last few years, getting to the point of getting to do stand-up on late night regularly.

At this point, Fahim also wants to bring his alter ego, the dance crazed Lance Cantstopolis to where he is. Already, he has gone on stage, fully in character, denim, dancing, and all, and has done pretty well for himself. Just look at the documentary, Outta Nowhere, Fahim made for Lance that has Jeff Ross, Mary Lynn Rajskub, Bobby Lee, Chris D’Elia, and Neal Brennan all talking him up.

Watch and judge for yourself how close Lance and Fahim really are.

Some of you might not remember that a score ago, Keegan-Michael Key, Jordan Peele, Alex Borstein, Ike Barinholtz, Bobby Lee, Will Sasso, Mo Collins, and way more were all on one sketch variety show together.

That show was called MADtv and, tonight, The CW is doing a special honoring the show’s 20th Anniversary with the cast.

If you want to see what brought all these folks before they hit it really, really big, tune into The CW at 8PM.

Much of America was first introduced to Bobby Lee through a show known as Mad TV.

Some of you might not know that he got fired from that show for a time and there’s a pretty funny, but harrowing story behind that.

Lee tells that story for This Is Not Happening with Ari Shaffir and you can watch it here.

Like we said earlier this week, This Is Not Happening with Ari Shaffir is set to premiere on Comedy Central Jan. 22nd at 12:30AM.

Also, you get to see how crazy the opening sequence for the show is as well.

This Is Not Happening with Ari Shaffir Premiering Jan. 22nd

The amazing comedian storytelling series This Is Not Happening with Ari Shaffir is having its TV series premiere on Thurs. Jan. 22nd 12:30AM on Comedy Central.

Shaffir, Keegan Michael-Key, and Bobby Lee are set for the first episode focusing on drug stories, so the premiere should be really good.

Be sure to mark this on your calendars and kick off your weekend next week with this.

The Story of Ari Shaffir vs. Bobby Lee at The Comedy Store with Steve Rannazzisi and Natasha Leggero

The latest episode of This Is Not Happening with Ari Shaffir involves four comedians that all are in the room when this was taped and all subsequently took the stage: Steve Rannazzisi, Ari Shaffir, Bobby Lee, and Natasha Leggero.

Watch and see what the hell happened here.