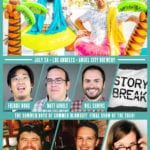 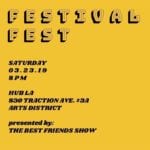 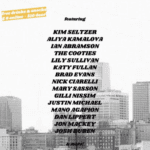 The melodious harmonies and absurdist humor of The Cooties (Ethan Edenburg, Jacob Jeffries, Eric Jackowitz) .will be making its way back to The Resident’s stage in DTLA next week along with special guest Anna Seregina.

Don’t miss their catchy tunes that are also so damned funny. Get your tickets here. 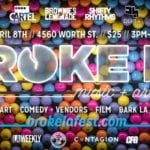 Broke LA provides a great platform for new artists in music, art, film, and comedy as well as a big one day festival that doesn’t break the bank and is here in the Arts District in DTLA.

For the “Comedy Sandbox”, the line-up includes:

In case you didn’t know, there a lot of talented folks that you should be catching in that line-up.

Get your tickets for Broke LA here.

“So we decided that we’re not going to have a comedy night anymore.”

That is what the management of Señor Fish told Russell Corona and me, Jake Kroeger, yesterday when we asked if we’re going to be allowed to run the Big Trouble in Little Tokyo Open Mic today. No matter how many times we posted and how many times it was even written on their dirty sandwich board that it was an open mic, Señor Fish failed to grasp the idea of open mic, especially one that focuses on comedy.

Open mics in general, no matter what art form is being performed, are supposed to be safe environments where one has the freedom to fail.  When it comes to being a comedian, an open mic is invaluable for not only hearing what you thought was such a genius comic book hero joke and finding it’s clunky as hell all the way to just getting comfortable talking to a room full of strangers a few minutes at a time.  With that in mind, both Russell Corona and myself asked about language and content restrictions for our show.  Though we were told we weren’t restricted in such regard, we were never told or hinted to the idea that Señor Fish was a “family friendly” restaurant.  Perhaps “family friendly” etched somewhere on a lone brick that was painted over in the gauche blue they have been using as of late.

If we had knew that, we would have gone elsewhere because open mics, in the truest sense, are not family friendly.  The idea that Señor Fish, which is a Mexican Seafood Bar & Grill hardly ever had a family friendly vibe, especially with the numerous DJ showcases, the stocking of more high end tequila, is quite shocking to both Russell and me.  The bigger point to be made is that the open mic took place in the back room of the bar section of Señor Fish (which has a separate address from the actual restaurant).  We were in a bar where they serve alcohol at great happy hour prices. That’s not “family friendly” no matter how you spin it.

We had been running the Big Trouble in Little Tokyo Open Mic successfully every single week at the same exact time with a consistent flow of comics coming through that bought beer and food without a minimum being imposed on them.  Yet, last week, after including an awesome sketch with hilarious and immensely talented Davey Johnson in which he bumped into a few chairs, mimed auto-erotic asphyxiation with his shirt and pants off, management found the reason that they were perhaps looking for to never have comedy again at their “family friendly” establishment.  Before I continue, though Señor Fish didn’t like Davey’s bit, everyone else that was witness to it did; some saying it was one of the most hilarious things they had ever seen.  I, as co-producer of the show, don’t regret for an instant having Davey Johnson do what Davey Johnson does and I urge each and everyone of you to catch him every Saturday at the Tomorrow Show as part of the Doorknockers with Randy Liedtke.

Though Davey did knock over some chairs and mime a sex act without most of his clothes, there have been way worst things that have been performed on that stage.  Horribly sexist, racist, threatening, and, most importantly, terribly unfunny garbage has been spat out at our open mic because, once again, it’s an open mic.  The good, the amazing, the bad, the insecure, the assholes, the comics who have no idea what they’re doing up there, pretty girls singing songs that sound like very Starbucks PA system ever, the guitar comic, the erotic magician, rappers just starting out, and more were all taken in like they’re supposed to at an open mic.

So, there will be no more live comedy at the Señor Fish located at the southwest corner of 1st St. and Alameda in the Little Tokyo neighborhood of Downtown LA.  Though it is sad as we had a great time running it and giving artists a space to work on their art (even to the point where we mentioned briefly in the LA Times), Señor Fish’s decision is more than fine by us as we were never paid beyond some beer and food that wasn’t fish for our efforts to actually drag a stage from across a parking lot, flip rooms full of furniture, just try to ignore the fact their on-call handyman is painting the room during our show without any notice ahead of time, and more bullshit that we just had to put up with in addition to the running one of the more popular open mics on the LA comedy circuit.

Undoubtedly, this will be hardly the last live comedy mic/show we will ever run and the Comedy Bureau will keep you updated on where the next one will be, but thank you to all who came and performed, especially the booked “special guests” that could have dropped in at a club for a better spot, watched, supported, or even thought about coming down to check it out and could never make it.  Our efforts were validated because of all of you and, one more time, we thank you.

And yes, this “tagged” flyer above is my lame attempt at being Banksy (even made lamer by the fact that I made the original flyer).