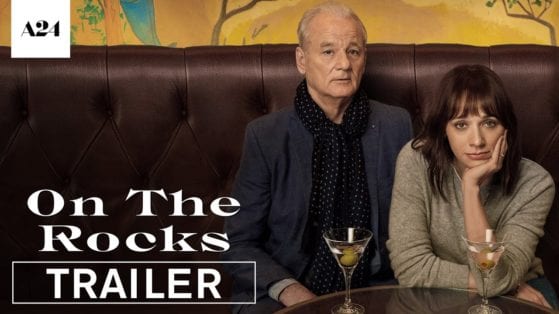 Sofia Coppola Taps Bill Murray Once More and Rashida Jones for Latest, “On The Rocks”

One of Sofia Coppola’s breakout works in her filmography is Lost in Translation that also ended being one of the more iconic roles for Murray following a career of iconic roles. Thusly, it wouldn’t be the only the twain should collaborate on something. Coppola ended up doing a Christmas special a few years ago centered around Bill Murray, A Very Murray Christmas, which was a definite departure from Murray wandering as one of the most famous people in the world in Tokyo. Now, Coppola’s latest film, On The Rocks, pairs Bill Murray with Rashida Jones for a father-daughter dramedy that follows a marriage between Jones and Marlon Wayans that might be exemplary of the title.

From the trailer, it would seem that there’s some sort of continuation of some spiritual/emotional arc of Murray’s Bob Harris from Lost In Translation with Murray’s role here; a quest for redemption via preventing similar mistakes that he made with love from happening again. It might be far fetched to call it a spiritual sequel, but it’s undeniable that there’s a niche that both Coppola and Murray fill in for each other. Throwing the comedic nuances of Rashida Jones and Damon Wayans (seemingly in more low key role than usual) makes for an atypical love triangle we’d really like to see.

Look for yourself in the trailer here.

On The Rocks is set to come out on Apple TV + in October.

Not only is this the first non-Christmas-special reunion of the winning Sofia Coppola and Bill Murray combo, but On The Rocks will very likely be the first prestige picture coming from the company that makes iPhones.

Everything here is lined up for this to be a sure bet with Coppola, Murray, Rashida Jones, and a premise that seems like a spiritual sequel to Lost In Translation (maybe we’ll finally figure out what Murray said to Scarlett Johansson?) that also might tap into that legendary mythos of Bill Murray himself:

The movie follows a young mother who reconnects with her larger than life playboy father on an adventure through New York.  Rashida Jones will star with Murray. Production starts this spring in New York.

We’ll keep a close eye out for trailer to see how sure of a bet Apple and prestige film factory A24 are taking.

It’s Dec. 4th and many of you are breaking out the Christmas decorations and lights or, at the very least, acknowledging that it’s the time of the year when people get in the holiday spirit.

No matter what your feelings are towards the holiday season, you can and should enjoy the Sofia Coppola and Bill Murray star-studded Christmas special, “A Very Murray Christmas” that’s now on Netflix.

George Clooney and Murray singing Christmas songs should make your day better even if you don’t observe any of the holidays.

Get into A Very Murray Christmas here.

This latest trailer for the upcoming Sofia Coppola directed A Very Murray Christmas assures you that you’re getting a glimpse into what lengths Bill will go to throw a great party rather than just crashing one.

Look for it on Netflix on Dec. 4th.

And Now, a Teaser For “A Very Murray Christmas”

It may be brief and subtle, but what more do you need than a small gesture and some Christmas attire to mark the coming of a Bill Murray/Sofia Coppola Christmas special?

Maybe some echoes of Lost in Translation?

Well, luckily, this teaser for “A Very Murray Christmas” coming to Netflix in December has all of this.

Bill Murray and Sofia Coppola Christmas Special Will Follow Murray Avoiding Getting Representation and Will Have Clooney, Poehler, Etc.

So, that Christmas special that will star Bill Murray and be directed by Sofia Coppola is coming together.

First off, Murray will play himself as will George Clooney, Amy Poehler, Maya Rudolph, and more. Then, eschewing more traditional holiday tropes in the majority of Christmas specials, the story will center on Bill avoiding by someone signing him as his representation in what we can only assume to be a Lost In Translation-esque romp through LA.

So, we were already on board for this and now, we’re even more on board if that’s possible.

No word on where this will end up, but we’re thinking HBO, AMC, IFC, FX, Netflix, Amazon, etc.

While this is certainly something we wouldn’t have guessed for Murray’s next project, we’re surprised that it taken years after Lost In Translation for any thing of this nature to happen with Bill and Coppola. Now that the plans are in motion, we’ll all be very happy to have something to watch that isn’t TV series binge watching we haven’t done during the rest of the year.

There isn’t details as to where it will air or a specific air date, but we’re sure that you’ll check your DVR constantly to make sure you won’t miss it.