Matt Dwyer’s First Album “Inside Looking Out” Is Out Now

It’s a bit of a surprise to us that Matt Dwyer hasn’t had an album under his belt already given his exhaustive comedy resume, but perhaps that is what makes this first album feel special and imbued with a sense of urgency.

Inside Looking Out is indeed Dwyer’s first album is being released by Jonah Ray’s imprint label Literally Figurative Records off of AST Records. Dwyer impressively spans his comedy repertoire, both in content and form, which he delights in as there is a lot to cherry pick from. He includes traditional stand-up, song, and reading of short form pieces that come from a very a brutally honest and sincere place, but, sometimes, ratchets the absurdity up to the nth degree. For all of that, Inside Looking Out gives you a really expansive scope of comedy at its core and its fringes.

You can get Inside Looking Out off of iTunes or on 12″ red vinyl. You can also stream it on Apple Music.

You’ve heard of album recordings done in bars before, but probably none like Bar 107 in Downtown LA. It is rather on the small side of a venue, but, nonetheless, a favorite hang of many comedians when in downtown.

Matt Dwyer will be recording his comedy album “Reluctant” there for Jonah Ray’s Literally FIgurative Records off of AST Records come next week, Sat. Jan. 17th at 4PM.

You’ll already be downtown for Riot LA, which is only a few blocks away, anyway. So, this would be the perfect to start off next Sat. 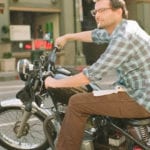 2) 8PM’s about when you’ll regain consciousness today, I mean this evening and try to remember where you left jacket, your wallet, and, incidentally, your innocence.  Just go on tonight’s COMEDY CRAWL and forget about it with Hipster New Year w/Eddie Pepitone @ Flappers Burbank 8PM/10PM $17/2 drink min.

4) THE BIG TROUBLE IN LITTLE TOKYO OPEN MIC is back for another round with none other than JACKIE KASHIAN and ANDY PETERS! Don’t miss out on some ass-kicking fun at Señor Fish (422 E. 1st St., Los Angeles, CA) this Tues. ¼. Sign-up 6:30PM. Starts 7PM.

5) The Comedy Bureau “Tips Its Hat” today to HASAN MINHAJ-“Law School Application” In his bio on his website, there is a line that reads “Today, Hasan enjoys writing biographies about himself in the third person.”  Taking his observations about the world and himself throughout the country, Hasan is a comedic whirlwind that should be seen when you ever he’s going on stage.  Such an occasion will happen on Mon. 1/3 at Keep It Clean @ 1739 Public House 10PM FREE and Tues. ¼ at Fresh Faces @ the Hollywood Laugh Factory 8PM $20/2 drink min.  Here’s his website again along with his Twitter.

6) From the “You Should Have Been There” Lagoon: Lenny Bruce All Alone (yes, I know I’ve posted this before, but if we’re taking this “brand new year” thing seriously, this is one of the first things I want anyone/everyone to watch in comedy.)

8) New Year’s Resolution jokes here we come, including the joke-within-itself of considering starting in comedy as an acceptable resolution.