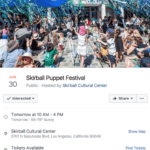 Tomorrow is time for the Skirball Cultural Center’s annual Puppet Festival. All throughout the center, puppeteers for all sorts of audiences will be performing from 10AM-4PM

General admission is $12 and you can (and should) get your tickets here.

1) American-the Bill Hicks Story hits U.S. theatres this week on April 8th, but the earliest you can see it is April 13th at the Comedy Store then April 15th at the Laemmle Sunset 5.  Something is wrong with this picture.  If it changes, the Comedy Bureau will let you know.

4) The Comedy Bureau’s own calendars have been updated with a few new venues!

8) Yesterday, the Comedy Bureau posted the article, “Why are THEY on the Show?” about the unfortunate trading of spots on shows that happens in LA and some readers were wondering a few things.  Specifically, The Comic’s Comic wondered about comics who struggle to get stage time starting their own room.  I have no problem with other comics starting their own room to get their own stage time if they can’t get it elsewhere.  Again, I reiterate stay away from trading spots.  Whether they are good or bad as comics is a matter of subjectivity to me really, but, as I point out in the article, if they can find an audience of their own, my opinion doesn’t really matter.  Another reader wondered that if a person works the Haha, Ice House, Comedy Store, Improv that they should get a shot at performing at another room.  First off, there are plenty of comics that are (and I’m putting this very politely) raw that get to perform at all of those clubs.  Once more, as I pointed in the article, plenty of comics can get laughs, but if they’re not funny to the booker, why should the booker put them up?  Last week, I saw someone do nothing but offensive material jumbling up the most controversial topics to date (i.e. Libya, Tsunami, and Liz Taylor’s Death) into one dick joke ridden mess and kill.  Did I laugh? I didn’t even smile.  Just because this comic happened to do good on a certain night because they had a good spot on the show, I don’t feel obligated or guilted to promote their comedy as, plain and simple, I don’t find them funny.  If you have any further questions regarding this article or anything else, please send them to thecomedybureau@gmail.com.