Here’s The First Trailer For Kevin Pollak’s Documentary Exploration of What Drives People to Do Comedy, “Misery Loves Comedy”

Premiering and getting bought up at Sundance this year, Kevin Pollak’s Misery Loves Comedy attempts to get in the nitty gritty of what motivates some of the funniest people around to do comedy as a career.

So, it might be worth checking out when it hits theaters.

Here’s Your Giant 2015 SXSW Comedy Line-up, Part of Which Will Be a Comedy Special

The rollout of awesome comedy festival line-ups for this year continues as SXSW is taking much of the best comedy from around the country to Austin, TX for a week.

Going from Mar. 14th-21st, the likes of the following will have their comedic stylings on display:

On top of that, two tapings for a SXSW comedy special are set to take place during that week run hosted by W. Kamau Bell.

So, get your badge already.

While there are still a few missing pieces in the thorough shifting of players around the late night world, there is now one less to try to figure out.

Reggie Watts upcoming departure as bandleader at Comedy Bang! Bang! on IFC for being the bandleader on The Late Late Show with James Corden really made us rack our brains as to who would fill Reggie’s shoes, sweaters, and hair. However, we no longer need to wonder since recording artist Kid Cudi has been announced as Reggie’s replacement starting July 10th.

Here’s The Trailer For Season 4 of Comedy Bang! Bang!

It isn’t too long from now that Comedy Bang! Bang! returns to IFC. This Fri. Jan. 9th at 11PM, season 4 of Scott Aukerman and Reggie Watts putting the concept of a talk show on its head will premiere.

To get you in the right headspace, here’s a full trailer chock full, per usual, awesome guest stars.

Such guest stars include and not at all limited to:

The Late Late Show with James Corden Has Premiere Date Moved and Gets Reggie Watts to Leave Comedy Bang! Bang! To Be Their Bandleader

Originally, James Corden was supposed to take over The Late Late Show from Craig Ferguson on Mar. 9th, but CBS has opted to move the start date two weeks back to Mar. 23rd.

We’re not sure the exact reasoning behind that, but, perhaps, it might have something to do with getting the one and only Reggie Watts, who is the current bandleader on Comedy Bang! Bang! at IFC, to come over to pair up with Corden.

At first, we thought that he might split his time between the two shows like Fred Armisen does at Late Night with Seth Meyers, but Comedy Bang! Bang! host Scott Aukerman confirmed in a series of tweets that Watts will be leaving as his bandleader in the second half of 2015.

Reggie is sticking around thru the first half of 2015, during which he have planned a very fitting goodbye for him.

Aukerman also added that we all should be listening for shouting in the streets in regards to who the exciting new bandleader for Comedy Bang! Bang! will be soon.

Who will be the new bandleader? I can’t say yet but it’s very exciting. Please listen for newsies shouting on street corners in early 2015.

On top of all of that, Corden has gotten a team of veteran producers who have run the gamut in late night including The Tonight Show Starring Jimmy Fallon, The Late Show with David Letterman, Last Call with Carson Daly, Lopez Tonight, and more. One of these producers, Mike Gibbons, has even been noted to be the co-creator of Tosh.0.

All of this makes for a much more intriguing beginning to Corden’s start at 12:35AM here in America.

Scott Aukerman Explains What He’s Up to on Comedy Bang! Bang! and Directing Obama for Between Two Ferns

Being the ringleader behind Comedy Bang! Bang! and Between Two Ferns, Scott Aukerman has had his fair share of chaos to deal with.

He stopped by Late Night with Seth Meyers to talk on the working parts behind Comedy Bang! Bang! and the extent of planning that goes into each episode as well as what the experience was like having POTUS Barack Obama on Between Two Ferns or, as Obama initially called it, Two Ferns.

In a preview clip of this latest season of Comedy Bang! Bang!, coming May 8th on IFC, Patton Oswalt and Scott Aukerman have some exciting news about the news Star Wars movie. In fact, it’s both news to them.

Having been accomplices in various acts of tomfoolery over the years, especially on Comedy Bang! Bang!, Paul F. Tompkins and Scott Aukerman don’t appear on camera sans character often.

Barack Obama Is on This Latest Episode of Between Two Ferns

No matter what we say here, we’re sure you’re going to watch President Barack Obama be a guest on Between Two Ferns with Zach Galifianakis. No, this isn’t a hoax like HUVr.

It might delight you to know that beyond the President doing an episode of a web series opposite Galifianakis, Obama is pretty great in ribbing Zach while plugging Healthcare.gov.

Give it a watch right now.

You did read that awesome line up that includes Bill Cosby is coming to SXSW, right? Good, get your tickets/passes now.

1) In Portland, OR now for a week, technically on vacation. Just hope you all appreciate that we still haven’t missed a single day of posting since we started.

2) Watch out for this: @marcmaron Okay, I guess the cats out of the bag. There is a feature on me and the show in the new @EW. Dunno if its out on newsstands.

3) You can still submit something to RE:COM for a few more days. Get in by June 30th.  Don’t miss an opportunity to 1) to be a force/voice for comedy 2) see your name in print (that’s right it’s a print magazine).

4) Congratulations to Barbara Gray and her fantastic show One Two Punch getting written up in the LA Times.  Follow @BabsGray on Twitter to keep up to date when the next One Two Punch is as well as damn hilarious tweets.

5) Comedy Bang Bang has a blog about their podcast?!? Alternative comedy gone ever more self-reflexive…

6) Speaking of self-reflexive, this video by “comedy artist” by Charlotte Young was posted by the Daily What several days ago, but  who hasn’t thought they were bullshitting whatever they were saying at least once while on stage? Only the other week, I could have swore that I said on stage, “I have material that works, I swear."

10) Got a brand new off-brand moleskine notebook yesterday.  Let’s hope there are less pages of scribbling "Fuck” over whatever was already written this time around.

If you haven’t heard this, it’s hilarious, unlike what the AV Club thinks. 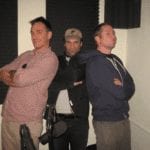 If you’re thinking this is “SOOOO LA”, then, yeah it is… and you’re just going to have to deal with it.