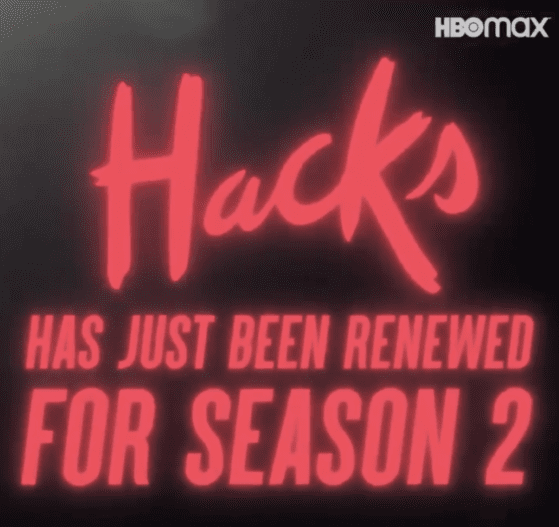 Hacks Is Getting a Second Season at HBO Max

As Hacks get towards the end of its first season, it really has proven itself as one of the best explorations of stand-up comedy in all of TV and film. The intergenerational dynamic between fictitious comedy legend Deborah Vance (Jean Smart) and her new writer Ava (Hannah Einbinder) captures so much about being a comedian both in decades past and the current moment as well how it has gotten better/hasn’t changed at all for comedians that are women. Also, Smart and Einbinder’s pairing is one of the more compelling relationships we’ve seen on a screen this year.

Thus, HBO Max has smartly given Paul W. Downs, Lucia Aniello, and Jen Statsky a second season, which, hopefully will get under way soon and won’t be held up by being in the thick of a pandemic.

If you haven’t given Hacks a shot yet, please get into it as it really is, again, one of the best representations of stand-up ever outside of the real life version of it and is currently one of the best shows on television.

This is not a joke. The queens of comedy are returning for Season 2 of Hacks! #HacksOnHBOMax pic.twitter.com/zb3vsL1WDf

The combination of Broad City alumni Paul W. Downs, Lucia Aniello, and Jen Statsky and a significant portion of the forces behind The Good Place, creator Mike Schur along with that has a Vegas diva mentor an “outcast 25 year-old” seems to be the sort of thing that a lot of streaming services are looking for right now.

While this pilot order did come from HBO Max, we could see such a series get developed at Hulu, Quibi, Amazon Prime, Apple TV+, etc. etc. All of that is too say that many streaming services are clearly aiming at younger cord cutter viewers that also have somewhat discerning taste in comedy. If that’s so across the board (in the realm of streaming), perhaps that means cheesy multi-cams will be no more? Only time will tell.

In any case, this pilot definitely is intriguing with very, very funny people in charge and we kind of can’t wait to see who they cast as the leads.

You can actually watch the first episode of what might be the first stoner comedy mini-series right here.

It’s premiering tonight at 10:30PM on Comedy Central and will air the next two episodes on Thursday and Friday also at 10:30PM.

By the way, Time Traveling Bong is exactly what it sounds like. Ilana and Paul toke up and time travel. So, you’re not going to want to miss that.

Yep, Ilana Glazer and Paul W. Downs Do Travel Through Time via a Bong in “Time Traveling Bong” Trailer

No one has figured out how to actually time travel, so why not imagine a world where you can do it through hitting a bong?

Luckily, Ilana Glazer, Paul W. Downs, and Lucia Aniello are bringing us all a mini-series event, Time Traveling Bong, that will show us all such a world.

This 4/20 special is so epic, it’ll air over three nights starting, of course, on 4/20 on Comedy Central.

Comedy Central Renews Inside Amy Schumer for a Fifth Season, Broad City for a Fourth and Fifth Season, and Is Giving Abbi and Ilana a Mini-Series

As Comedy Central is in a current golden age with the likes of Nathan For You, Review, and Drunk History in addition to Inside Amy Schumer and Broad City, it just stands to reason that they would keep that going.

So, Broad City got picked up for two more seasons, which would bring Abbi and Ilana’s misadventures in the Big Apple to seasons 4 and 5 and got a mini series called Time Traveling Bong written by their writers Lucia Aniello and Paul W. Downs.

Comedy Central also announce that Inside Amy Schumer got its fifth season today and we can only imagine that Schumer is going to build off of the milestone year that she had in 2015 with her groundbreaking series.

Sony Pictures is really getting into the Paulilu business.

Already, Paul W. Downs and Lucia Aniello are developing a female spin-off of 21 Jump Street. Now, Downs is set to star in a new R-rated comedy directed by Aniello that they wrote together.

Details on the story are scarce, but it looks like you should expect a crazy weekend that has gone terribly wrong involving some form of being incapacitated.

Following from The Duplass Brothers and Chris Miller and Phil Lord, Looks like another power comedy writing duo is on the rise.

Apparently, Paulilu and the Molyneux sisters are writing different versions of the same movie.

Wendy and Lizzie Molyneux have gotten Sony to buy their pitch for the female led version 21 Jump Street. Paul W. Downs and Lucia Aniello were already working on a script, but now the two pairs will be writing different scripts based on the pitches they sold.

There are no other details than that available at this time, but we wouldn’t be surprised if either movie is made, then the script for the other gets released online and people demand to see that one also get made.

Paul W. Downs and Lucia Aniello Are Writing a Female Led Spin-Off of “21 Jump Street” and That “Men in Black” Crossover Is in Development

You could ask “What hath Chris Miller and Phil Lord wrought?” but all of this could be just as self-reflexively fun as the original 21 Jump Street.

Paul W. Downs and Lucia Aniello who both write on Broad City and together comprised Paulilu are now set to write a female centric spin-off of the 21 Jump Street franchise. Don’t be surprised if the duo that ends up together resemble the duo of Broad City’s Abbi and Ilana.

Now that the dust has settled from the Sony hack of last year and the recent WikiLeaks dump, the development of a Men In Black and 21 Jump Street crossover movie has been confirmed. We certainly hope that there’s plenty of jokes within the movie poking fun at how ridiculous this project could be, which seems to be a stamp of Miller and Lord’s.

We’re not sure how much Jenko, Schmidt, Miller, or Lord will be involved, but we do hope that this bodes well for that 21 Jump Street sequel where they go to art school.