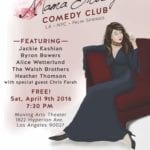 In a black box theater, comedians “try and impress” the “one and only” Mama Trudy to “get passed” in her new “comedy club”.

1) French Toast @ Taix is the “pleasant surprise” kind of a show.  Actually, it’s one hell of a surprise as you are sitting in the lounge of French countryside themed restaurant in Echo Park, Taix, an establishment where comedy might just seem out of place, thinking, “How exactly is this show going to happen?” and then are in for a comedy treat almost in the spirit of the name of the show.  Taking cues from comedy venues of the past, French Toast puts on their show right in front of a brick wall with a lovely decorative fireplace and give you a good old fashioned stand-up comedy show with some of the best, trailblazing comics, up n’ coming comics in the country.

(co-founder/normal co-host Zach Sherwin could not be in attendance) ensure a tightly run show that proves Margie’s own words of “keep them wanting more.”  Last night’s incredibly lucky crowd of both comedy fans and open minded people that stuck around for the show were treated to the likes of comics such as Kyle Kinane (pictured at top), Maria Bamford,

and TJ Miller.  Anywhere else in the country, outside of NYC and maybe Chicago, it’s nearly impossible to have a line-up like this in such an intimate venue without charging the audience a single penny to watch the show.  In other words, don’t let your Sunday nights in LA drift off in a stupor of watching whatever happens to be on TV, when there’s a great free comedy show.  French Toast is on every Sunday at Taix (1911 W. Sunset Blvd., Los Angeles, CA in Echo Park) for FREE.  Check back at the Comedy Bureau for details on the next one.

4) RT @thecomedybureau @pauljaycomic suggested wearing some sort of reporters fedora with a press pass sticking out of it when out as the Comedy Bureau. Thoughts?

7) The Comedy Bureau “Tips Its Hat” today to ROBERT YASUMURA- “@teamyasumura At what point does Fox News just come out and condemn Galileo?”  Known throughout comedy circles in LA as one of the well-respected hosts of the Westwood Brew Co. open mic on Tues., Robert has been a fixture in the LA Comedy scene for quite some time.  Robert takes his incredibly sharp wit and deadpan demeanor from mics across town to through a thousand people’s Twitter feeds and should not be missed by you.  Here’s Robert’s website and Twitter.

8) From the “You Should Have Been There” Lagoon: Richard Pryor “Being Cool” on the Ed Sullivan Show

9) Want to guess how long it took to write this post as well as edit all the pictures and do all the research for all the shows and open mics and go through everyone’s twitter, tumblr, and facebook feeds and write this very sentence?  Donate to the Comedy Bureau and I’ll tell you if you got it right.

10) As you have already read or will very soon read, this is the 50th post of the Comedy Bureau…. which doesn’t really mean anything other than I’m 50 days past moderate to passable brain-to-common sense cooperation.

1) Schtick or Treat @ Taix made the word “epic” seem a woeful and paltry adjective in attempting to describe what was one of the best times I’ve ever had a comedy show.  Even though there were over 30 performers, it was the epitome of a “good ol’ time” the whole way through.  Seriously, what other show in LA can you see “Steve Martin”,“Russell Brand”, “Carrot Top”, “Eddie Pepitone”, “Sarah Silverman”, “Rowdy Roddy Piper”, “Kyle Kinane”, “Gilbert Gottfried”, “Andy Kindler”, “Weird Al Yankovic”, and “Jake Weisman”?  That’s right you can’t think of one until 364 days from now, but go to the normally schedule French Toast every Sunday 8:30PM for FREE at the same lovely 321 Lounge @ Taix.

3) Like I mentioned yesterday, there’s a new feature in a long line of innovations from the Comedy Bureau that allows you to keep track of most regularly scheduled live comedy in LA. NOW UPDATED WITH THE J-SPOT.  Other fine comedy establishments soon to follow.  Again here it is, The Comedy Bureau’s very own Calendars.

4) Unlike “real people” with “actual money”, comedians have to/should be working on our act and, as such, THE COMEDY BUREAU will be attempting an open mic run of 3 spots, which, if you know anything about driving in LA, is near impossible.  Well, IMPOSSIBLE CAN GO TAKE A DIRT NAP!!!  TRIBAL CAFE. GROUND ZERO USC. TAIX.  The Comedy Bureau’s very own Bureau Director will be live tweeting during this test of endurance/patience/more patience, so stay tuned for the play-by-play right here.

5) At least, someone likes us.  Thanks Shayne-Michael.com

6) Now it has a face.  The Big Trouble in Little Tokyo Open Mic.  NOV. 9TH.  6:30PM.  Please don’t forget, mostly because I don’t have any enforceable consequences if you do.

7) Given the impulsive notion of large scale chain retailers in the U.S., is it too early to tell Black Friday jokes?