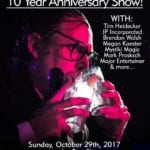 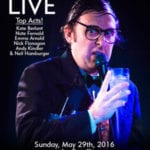 As Entertainment is coming out, Gregg has decided, for the first time, to give the low down on his most notable character, Neil Hamburger.

For years, Gregg Turkington and Neil Hamburger were the same person, just in and out of character, but mention of each other by either one was virtually non-existent. Hamburger wouldn’t do interviews and Gregg really never talking about playing Neil and making a name for Neil.

Since he’s doing promotion on a movie centered on that character, he feels the need to answer any and all questions about Neil with full transparency regarding origins, intentions, death threats etc.

He answers a lot of those questions in this nterview with THR’s Seth Abramovitch.

You can see what’s it like in front of and behind the arm full of old fashioned glasses and trying to make it while also being at the fringes.

Watch the trailer for Entertainment here, then look for it in theaters and on iTunes on Nov. 13th.