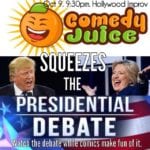 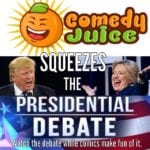 1) RIP Leslie Nielsen-Without Surf Ninjas, I don’t think I would have had a childhood.

2)  You want a ‘Recession Special Sale’?  Do you want a ‘Holiday Special Sale’?  Well, forget both of those because probably the cheapest/best COMEDY CRAWL I’ve ever posted.  So start saving with What’s Up Tiger Lily? @ Hollywood Studio Bar & Grill 8PM FREE, then Comedy Show @ The Cherry Pit 9PM FREE, then Keep It Clean @ 1739 Public House FREE, and feel like you’ve gotten your $5 dollars worth by ending the night with Crash Test @ UCB Theatre 11PM $5.

4) Comedy Central just released its list of the best breakout comedians of 2010 and Comedy Bureau favorites Kyle Kinane and Chelsea Peretti (Reggie Watts too, though he’s NYC) made the list.  Congratulations to them as they will all be featured on Comedy Central this Friday. Check back at the Comedy Bureau for more details.

5) The Comedy Bureau “Tips Its Hat” today to ANDY PETERS–

Hailing from Seattle, Andy now, luckily for us, Los Angeles his home and is a favorite all around the LA comedy circuit from the likes of the Hollywood Improv to the Hollywood Studio Bar and Grill.  Absolutely “tearing it up” on stage with his fierce, irreverent style, one should never miss a chance to see Andy Peters perform.  Your next chance will be tonight at Anthill Pub & Grille (C-215 Student Center, UCI, Irvine, CA ) 9PM FREE and at Comedy Juice @ The Hollywood Improv Dec. 1st 10PM $14/2 item min.  Also be sure to check out his Website and Twitter.

6) From the “You Should Have Been There” Lagoon: Bill Hicks Play From Your Fucking Heart

7) So the Comedy Bureau will be at an open mic tonight, so THERE WILL BE LIVE TWEETING (oh, and it will be some fun as this open mic doesn’t have a host). I’ll be taking donations here.  I mean, please give… here.

8) Getting ready for a show that takes place after an AA meeting this week.  Somehow, I don’t think open mics help that much in this regard.

1) A GREAT BIG THANK YOU to everyone who caused some GREAT BIG TROUBLE IN LITTLE TOKYO!!! Let’s do it again sometime… MEANING next Tuesday at the same time and in the same place. (hint: Sign-up 6:30PM. Starts 7PM. @ Señor Fish, 422 E. 1st St. in Little Tokyo/next to downtown OR 1st & Alameda) Also, better directions for free parking!

2) Give thanks that you don’t have to find all these great shows for tonight’s COMEDY CRAWL. Go to Nobody Likes Onions @ The Hollywood Improv 8PM $14/2 item min., Come Out Laughing @ The Long Beach Laugh Factory 8PM $12/2 drink min., Meltdown @ Meltdown Comics 8:30PM $8, Beer in the Shower: Pilgrims & Indians-Potluck/Stand-up @ Whitehorse Cocktail Lounge Inn 9PM FREE, Comedy Juice @ The Hollywood Improv (yeah, I’d actually go to this one).

4) Like I always have promised, I bring you the best in LA Comedy and now I’m making it even easier to find it on this blog. The Comedy Bureau now introduces “Bureau Approved”, which everything that pasts the rigorous test (i.e. whether I like it or not) of the Comedy Bureau Comedy Standards and features anything from podcasts to webseries to blog posts to clips of people being on the tube. Check it out here.

5) The Comedy Bureau “Tips Its Hat” today to JAMIE LEE-@thejamielee Tofurkey? Tofuck yourself. Having already been on Last Comic Standing this year, Jamie has been a real gift to LA Comedy this year during her stay in LA (OK, she’s a NYC comic, but, for now is calling LA her home). Currently, she brings her sharp, witty, and charming comedy to homes around America writing for “Ridiculousness” on MTV and can be seen LIVE on “Crash Test” @ The UCB Theatre 11PM Mon. Nov. 29th and the “Conan Showcase” @ The Hollywood Improv 10PM Tues. Nov. 30th. Here’s her website and her twitter for all the Jamie Lee you can possibly handle… and then some.

6) The Comedy Bureau adds yet another rank to its Chain of Command: Head of Karma Police Russell Corona (don’t worry he can’t actually do anything to anyone). Welcome to the Comedy Bureau, Russell.

7) If you have any suggestions, comments, remarks, just want to say Hi to make sure that I’m still doing OK, etc. for the Comedy Bureau, there is an e-mail that you can send them to at thecomedybureau@gmail.com. So simple that you almost don’t have a reason not to do it.

7) Does the Salvation Army do anything for LA Comedy? I don’t THINK SO! Donate to the Comedy Bureau here.

8) If you’ve ever wondered what a comic thinks while going from open mics to shows to coffee shops and bars to various streets to get/write material, follow the Comedy Bureau on Twitter here. I’m pretty sure a small minority only wonders that, but please “humor” me and do it.

9) Tomorrow will be the ONE MONTH mark that the Comedy Bureau has been officially running. I know it’s not “that” impressive, but I just want to thank everyone for has been following this blog/loving read it/supporting the Comedy Bureau/etc. and point out that, ironically, tomorrow has only one or two comedy events to write about. Thanks again everyone, comics and real people alike!!!