We had musings about what a “Jim Jarmusch zombie movie” might be and, we’ve got to say, thankfully, the trailer for The Dead Don’t Die hits pretty close to what we’re expecting.

Great looks and quips from Bill Murray, a samurai sword wiedling Tilda Swinton, a down-to-earth Adam Driver doing his best, Iggy Pop as a zombie, and, of course, a great soundtrack has our appetite whetted even further.

Get a look for yourself here, then mark your calendars for June 14th when The Dead Don’t Die hits theaters.

Other than it’s a Jim Jarmusch zombie movie with Bill Murray and a cast including “…Adam Driver, Tilda Swinton, Chloë Sevigny, Steve Buscemi, Danny Glover, Caleb Landry Jones, Rosie Perez, Iggy Pop, Sara Driver, RZA, Selena Gomez, Carol Kane, and Tom Waits,” there are few details as to what this might be story-wise or tonally.

However, based off Jarmusch’s last foray into the undead, Only Lovers Left Alive, that was a beautifully dark romantic comedy that happened to follow vampires, we’re going to guess that this might be in the ballpark (maybe even in the same cinematic universe, a Jarmusch-verse)? The playfulness in the title even feels like a follow-up/spiritual sequel to Only Lovers Left Alive. 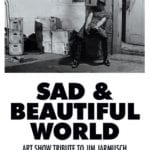 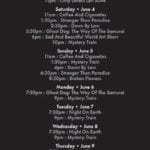 Tickets are $10 per screening and you can (and should) buy them here.

If Santa Ana is a bit of trip for you, there will be a free screening of Mystery Train at Nerdmelt this Thursday.

The rest of our listings for comedy event/shows as well as open mics and corresponding maps are embedded at www.thecomedybureau.com.

Amazon knows how to hit those indie buzz names.

Though typically it’s a few years before we get the next Jim Jarmusch movie, it’s kind of worth it.

2013 had the fantastic dark vampire wry romantic comedy Only Lovers Left Alive and 2016 promises his next film Paterson with Adam Driver starring.

It’s coming out through Amazon Studios and it’s going to be a wry comedy (that’s kind of Jarmusch’s thing in case you weren’t familiar) and that’s about all we know right now.

Still, you can let your imagination conjure up what a Jarmusch movie with Driver in it might be and still be wildly and delightfully surprised and what we’ll end up getting.

If You Only See One Movie with Vampires, See Only Lovers Left Alive

Jim Jarmusch’s latest work Only Lovers Left Alive is the vampire movie for those who hate pretty much all vampire movies (anything from Dracula from 1992 to Twilight, etc.). In a way, it’s a beautiful dark romantic comedy featuring Tilda Swinton and Tom Hiddleston in amazing roles that you had wish that you had seen them in before. This very well may be Jarmusch’s best film to date.

Also, for those of you that can’t stand watching horror, there is scarcely a terrifying moment. It’s playing in LA at ArcLight Hollywood and The Landmark and we highly suggest you go watch several times over.