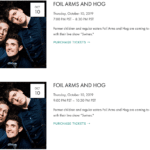 Their pure absurdity is a true joy to watch and has gained them critical acclaim at such festivals as the Edinburgh Fringe and quite a following online. For their one night only appearance at Dynasty Typewriter next week, the early show is already sold out. Make sure you grab a ticket to their late show, 9PM on Thurs., Oct. 10th before they could sell out.

They’re going for $35 and you grab them now right here.

From the end of this month until December, the brilliant Emily Heller will be stopping in Montreal, Dublin, Toronto, Texas, Vermont, Indiana, Virginia, and San Francisco for festivals, shows, etc..

If you’re anywhere near those places for her the dates that she’s playing, do yourself a favor and watch her perform.

Questioning the point of life never seemed so upbeat.

David O’Doherty performed on Conan last night armed with a little keyboard and fun little songs about the ever present dilemma of life and it’s meaning and purpose is.

Please give it a watch and you might feel better about the potential meaninglessness of it all.

Jen Kirkman Going to Sweden to Dublin to Winnipeg, Vegas, and More

If you’re anywhere in those parts of the planet, which it seems there will be plenty on this tour, please do go watch her live. Tickets for most of the shows are on sale now.

That’s right, using a controller, an extra TV, and his voice talent, Read does Set List as a cartoon and manages to keep the material from possibly R-rated topics relatively PG rated. Watch it here.

The Lovely CIty of Galway, Ireland Is Going to Have a Great Comedy Festival

The Lovely CIty of Galway, Ireland Is Going to Have a Great Comedy Festival

Not only is Galway, Ireland one of the more scenic places in the country, especially as it’s situated right on the western coastline making for gorgeous sunsets, it’s going to be the site of what has the ingredients for a great comedy festival this October.

Namely, Eddie Pepitone, Glenn Wool, Set List: Improvised Stand-Up as well as hilarious UK talents of Stewart Lee, Russell Howard, Omid Djalili are performing and if you just happen to be in Ireland, you should make it out to this.