It’s rare that you get such an in depth look not only into the mind of a comedian, but a deeper look into a being who simultaneously was one of the most beloved comedians of all time and sincerely pondering the meaning of it all and our connection to each other and the universe.

That’s only possible because the late Garry Shandling kept plenty of notes and diaries for several years and Judd Apatow, a disciple of sorts of Shandling’s, wanted to make a documentary about him.

Here’s Apatow giving a bit of a taste of the doc on Conan.

With that in mind, you can catch the world premiere of The Zen Diaries of Garry Shandling tonight and tomorrow on HBO at 8PM.

One of the first really big gigs that Judd Apatow got was coming aboard The Larry Sanders Show. As such, Garry Shandling played a significant role in his life beyond just being a big time fixture in comedy to admire from afar.

The passing of Shandling came and went quickly, without very much warning, but Garry’s life and career are something to marvel at.

To show people how marvelous it really was, he made an in-depth documentary featuring personal journals, video, etc. coupled with conversations with those closest to Shandling.

The result is The Zen Diaries of Garry Shandling. You can get a taste of how deep Apatow goes with this trailer.

The loss of Garry Shandling last year was devastating. The reverberations of his work are still being widely felt throughout comedy, especially when it comes to The Larry Sanders Show.

To honor his legacy, writer/director/producer Judd Apatow will be making a documentary about Shandling. In fact, Apatow is looking for any photos, videos, etc. that might help in the making of said doc.

No details as to when or where this might be released, but we will update you as soon as we can.

Directors Lloyd Stanton and Paul Toogood extensively interviewed all of the above and made what might be another documentary that showcases stand-up as being more than just a bunch of clowns rattling off jokes every night. 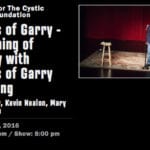 Largo at the Coronet Theatre is hosting a benefit for the Cystic Fibrosis Foundation in honor of the late and great Garry Shandling that, whether you were a big fan or barely knew him, you’re not going to want to miss.

“The Larry Sanders Show” Set to Come to HBO

Rather than hunting around for DVD box sets, you’ll be able to binge watch, as you should, Garry Shandling’s masterpiece of a television show.

Before his unfortunate passing yesterday, a deal to get The Larry Sanders Show over at HBO was closed. Soon, you’ll be able to watch episodes on HBO as well as stream them on HBO’s streaming services.

When that happens, make sure you have an HBO GO account or a friend or family member that’s generous with their password.

In a very personal tribute in memory of the recently passed away Garry Shandling, Conan O’Brien pointed out why Garry was amazing outside of just being one of the comedy greats.

Shandling not only had done panel with Conan over the years, but Garry also offered counsel and emotional support to O’Brien in the days following the unfortunate end of hosting The Tonight Show. Conan told the story in detail on last night’s episode of his show.

Undoubtedly, this is only one in many stories to come of why Shandling was, is, and will be revered in the world of comedy and beyond.

It was only a few months ago that he seemed as jovial and sharp as ever on Comedians in Cars Getting Coffee.

It’s Garry Shandling’s Show., The Larry Sanders Show, his stand-up, and much more all made for a beloved Garry Shandling for his 66 years on this planet.

Unfortunately, he passed away today. No further details about his death have been released yet.

May you take a moment or two to mourn the passing of a comedy great and then spend hours rewatching all the countless hours of weaving your way though the far-reaching, influential comedic legacy he left behind.

There are few guests on Comedians in Cars Getting Coffee that go as far back with Jerry as Garry Shandling.

Pretty much every step of each their comedy careers was in sync from playing The Comedy Store to their own hit sitcoms. Thus, making a drive and a stroll down memory lane was pretty fantastic. This is actually one of the best episode of Comedians in Cars Getting Coffee.

In addition to Garry Shandling, Steve Martin, Will Ferrell, Sebastian Maniscalco, and Kathleen Madigan, Jerry Seinfeld is riding with President Barack Obama and grabbing some coffee for season 7 of Comedians in Cars Getting Coffee.

Don’t believe us even though Obama’s been setting a new precedent by being on shows like WTF to Running Wild? Watch the trailer.

Look for this new season to start streaming on Wed. Dec. 30th on Crackle.

This week of The Late Late Show’s interim period between Craig Ferguson and James Corden is definitely one worth checking out.

The one and only Jim Gaffigan is filling in as host for most of this week. That fact alone should make you clear out 12:35AM to watch.

On top of that, Michael Ian Black, Sarah Silverman, Kumail Nanjiani, Dave Koechner, Justin Willman, Lena Dunham, Maria Bamford, Garry Shandling, and more are all going to be guests that sit down with Gaffigan.

So, make a reminder for 12:35AM at CBS and let’s see if Jim has The Gaffigan Five worked into the show at all.

2) Jorge Garcia from Lost apparently tried out stand-up at the Laugh Factory. [via BTNPR]

3) Davey Johnson is really one of the funniest people we know. Watch ‘What’s What?’

10) So according to their posted calendars, the Comedy Store and Sal’s Comedy Hole will still be having their open mics run on the 4th of July.  Anyone else running their mics/confirming they hate their families, don’t have friends? (Because no one hates fireworks and the taste of BBQ unless you’re a pinko commie)