Pete Holmes, who we would imagine is currently living life to the fullest right now, will be, in his HBO show, recreating version of a much more desperate time in his life for a whole second season.

See who Pete crashes with this time ‘round including Bill Burr, Wayne Federman, and Jamie Lee as well as plenty of other notable cameos in this trailer.

HBO has come to a decision pretty quick to renew Pete Holmes’ series Crashing for a second season.

Currently, they’re in the middle of their first season, which makes us ponder how exactly Pete will continue the premise of ‘crashing’ at other people’s places through the second season. 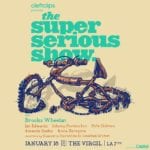 One of our favorite comedy variety showcases around, The Super Serious Show, have their first show of 2017 stacked.

Tickets are $7 in advance and $10 at door. Please get them here.

Crashing, as you’ll see in this trailer, will be a fun look into what Pete Holmes’ life was like and how desperate it was before he was flying high in his career with an HBO special and series under his belt.

Take note that 2017 might be a really good year for Jermaine Fowler too.

Crashing premieres on Sunday, February 19th at 10:30PM on HBO.

Long time listeners of You Made It Weird might be familiar with the much more tumultuous past of Pete Holmes, specifically the time when his ex-wife left him all of sudden.

This chaotic time in Pete’s life is at the core of Crashing, his series that’s coming to HBO on February 19th.

Get a first look at the series right over here.

HBO isn’t going without a Judd Apatow-produced series on their line-up.

Pete Holmes will indeed be returning to TV, this time with a single camera comedy based on his life rather than a talk show. Crashing will follow the portion of his life following his divorce where he crashed on comedians’ couches around NYC. Fans of Holmes’ podcast You Made It Weird should be more than familiar with the subject.

Holmes created the show and will star and Judd Apatow directed the pilot and is on board as an executive producer.

This counts as three series that Judd will be overseeing this year, the other ones being the upcoming Love at Netflix and Girls, which will be coming to a close in the not so distant future.

We knew it was only a matter of time before Pete Holmes got another show.

Pete Holmes has written a pilot about the time in his life where he just gotten divorced and was crashing on a couch of comedian friends, hence the title.

You’ve probably heard plenty about this on Pete’s podcast You Made It Weird, but seeing it actually played out on a sitcom is very intriguing.

It would seem more than probably that Pete would have all his friends on the show, which would mean we’d all get to see Kumail Nanjiani on yet another premium cable show.