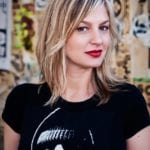 Christina Pazsitzky is a Stand-Up Comedian and Writer who is a Los Angeles native and proud of it. She is a regular on the popular E! show “Chelsea Lately”, and tours all around the country and abroad entertaining people. You can check her calendar to see if she’s coming to your town. A long-time veteran of television, you can see Christina weekly on the E! Channel’s “Chelsea Lately” and “Wildest TV Moments”. She hosted the FX series ‘Hitchiker Chronicles’ and was a cast member on MTV’s “Road Rules Australia”. She was a regional finalist on NBC’s ‘Last Comic Standing’ and is a featured comedian on Animal Planet’s “The A List”. Christina has also appeared in feature films with the ‘Jackass’ boys in ‘TV: The Movie’ and has lent her voice and written on several animated films, like ‘Strawberry Shortcake’ and ‘Dr. Doolittle’. She is a nationally touring comedian, and has entertained our troops abroad. In 2007, she placed 2nd in California’s Funniest Female contest and was given the “Up and Coming Writer’ Award in Animation Magazine for her comedy writing work. You can hear her on the nationally syndicated “Bob and Tom” radio show and you can find out which animal she would marry hereBefore becoming a Comedian, she studied Philosophy at Oxford University and attended Law School for 2 entire weeks.

You can find Christina on Tumblr, Twitter and Facebook and also making her Original Room debut This Friday!

Give an “F YEAH!!!” for Christina Pazitsky (@christinap). Congrats from the Comedy Bureau.