It truly has been an honor to get to be a part of Speedface (we’ve been helping produce it for a couple of years along with the show’s creator, the great Eric Moneypenny), one of the most insane shows in and around LA and while it is sad to know that its swan song is this Sunday, we’re thrilled by the idea that it’s going to be one truly hysterical, out-of-this-world, headbangin’ swan song comprised of bonkers 100 second comedy bits presided over by timelord Dr. Timef**k (Nick Gligor) and his time slave, the titular Speedface (John Paliferro).

Really, we’ve got a lot up our sleeve (even more so than Home-Improvement-ized version of Doom in the flyer suggests).

It’s a little earlier than normal at 9:30PM, so all of you who thought our normal start time on Sunday was too late are now obligated to come! It’s still pay what you can FYI. Get more details, RSVP, etc. here. 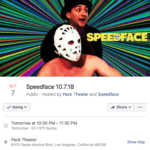 After knocking out two shows in August, the pretty-much-anything-goes-100-second-variety-show-hosted-by-time-travelers, Speedface, is finally back!

As with all Pack Theater shows, admission is pay what you can! Get more details here. 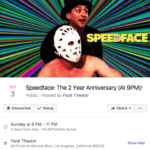 For 2 years, The Pack Theater has been home to our favorite inter-dimensional character/bit show, SPEEDFACE.

To mark this anniversary this Sunday, they’re starting earlier than normal at 9PM so they can put on an extra special, big Speedface chock full of the best bits of comedy that only last 100 seconds.

As with all shows at The Pack Theater, admission is ‘pay what you can’. Get more details here.