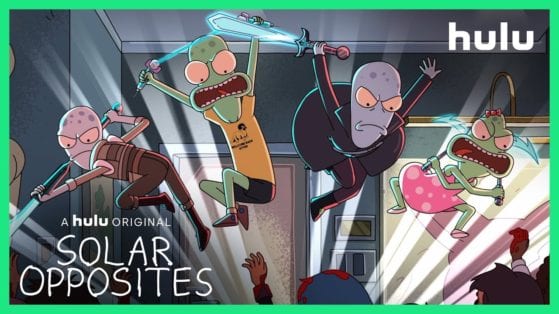 In fact, Solar Opposites doesn’t seem to be all that far off from Rick & Morty (maybe living in one of the other universes within the Rick & Morty-verse). It follows an alien family trying they best they can to acclimatize to earth, but, of course, dealing with all the sorts of chaos Roiland has founded his entire career on. Intergalactic warfare, zombie outbreaks, a plethora of jauntily named fictional creatures, and plenty of family squabbling are all part of this new show.

See all of that and enjoy the teaser here, then look for the series premiere of Solar Opposites on Hulu, starting May 8th (even though we’ll probably be let out of our houses at that point).

If there’s anyone in the world to find a way to explore the emotions and complexities of two anthropomorphic blobs to the point where they can make a TV show about it, it would be Rick and Morty’s Justin Roiland.

Called Gloop World, Roiland will indeed delve into the lives of two blobs named Bob Roundy and Funzy. We only have this much info as to what Gloop World will entail, but this whole idea does make us think of that Terryfold song.

Also, count this as another very, very intriguing get for the still yet-to-be-launched Quibi. They only get more and more enticing every other week or so with a new, crazy acquisition to their slate.

It has been so long since the season 3 finale of Rick and Morty, it feels like perhaps we’re in an alternate dimension from October 2017.

However, as far as we can tell, we’re still in dimension C-137 and, thankfully, new episodes of season 4 are just around the corner. In fact, 5 new episodes are coming, starting Sunday, Nov. 10th at 11:30PM on Adult Swim.

When it comes to adult animation with a intergalactic/interdimensional setting, Justin Roiland might just have cornered the market.

This latest series order by Hulu from Roiland and Rick and Morty writer/EP Mike McMahan will follow an alien family taking refuge on Earth from “better planet”. That seems right in their wheelhouse and, as an added bonus, the sweet voice of the hilarious Mary Mack will be behind one of the characters.

Please note that you’ve got around two years before this comes out. Good thing there’s a bunch of Rick and Morty coming up to keep you satisfied in the meantime.

Since there’s more of a guarantee of Rick and Morty to come along (i.e. Adult Swim ordering more than 70 eps.), the wait time between seasons will be way less.

Hopefully, that will satiate even the most extreme of Rick and Morty fans and perhaps avoid another McDonald’s Szechuan sauce debacle.

Just like you shouldn’t really worry about that annoying Avengers: Infinity War cliffhanger, you shouldn’t have worried about the long-awaited renewal of TV’s most popular comedy (a feat made more impressive by the fact that Rick and Morty aired on Adult Swim, a far cry from primetime on a traditional broadcast network).

So, it looks like we’ll be getting enough Rick and Morty to last us through the Trump Administration and whatever other horrors lie ahead in the future. Thank goodness. Now that you know that 70 episodes are guaranteed, you can rest easy (i.e. watch a bunch of other TV) until season 4 and beyond arrive.

Finally, something in this godforsaken year is going right.

Keep in mind that this is especially impressive given Rick & Morty’s late night time slot that’s on a network that uses a limited time slot on another TV network.

One can only hope that this will be where a tide could possibly turn toward making more quality, original series rather than reboots, revivals, etc.

Part two of the mini doc series that shows how Rick and Morty came to be lays out the actual creation of the show and its subsequent development at Adult Swim. (Oh yeah, watch part one that shows the seeds of Rick and Morty being planted at Channel 101 if you haven’t already).

You’ll get to see how the show could have been drastically different were not for some ingenious retooling by Justin Roiland and Dan Harmon. Watch it here.

Rick and Morty Song ‘Terryfold’ Actually Made the Billboard Charts

Rick and Morty Song ‘Terryfold’ Actually Made the Billboard Charts

A collaboration of Justin Roiland and Chaos Chaos actually got enough streams and purchased downloads with the sublime and ridiculous song “Terryfold” from a recent episode of Rick and Morty to get #33 on Billboard.

The song itself seems like a cross between Liam Lynch and Tame Impala, but more importantly it shows the reach that Rick and Morty has. Just like Last Week Tonight has been suspected of having a “John Oliver Effect”, Roiland and Harmon might be responsible for a “Rick and Morty Effect” (remember the Szechuan sauce?)

As part of a chat with Vulture, Justin Roiland, Dan Harmon, Ryan Ridley, Spencer Grammer, and Sarah Chalke (AKA cast and creators of Rick and Morty) not only improvised what a few scenes from a crossover of Rick and Morty and SpongeBob Squarepants might be like, but also got some accompanying animation to really bring it to life.

Spoiler alert, the crossover is definitely more Rick and Morty than it is SpongeBob.

Watch and enjoy here before you sit and tune into tonight’s new Rick and Morty at 11PM tonight.

An integral part of the premiere episode of Rick and Morty season 3, as you might know, is McDonalds promotional Szechuan Sauce.

Well, after the livestreaming of the premiere on April Fools’ Day this year, it would seem McDonalds got in on the fun and sent this package to Rick and Morty co-creator Justin Roiland.

We can only imagine what other multinational companies will bend to the will of Rick and Morty season 3.

We shall see as the season premiere is tonight at 11:30PM on Adult Swim.

“The Art of Rick and Morty” Book Coming Out Soon

“The Art of Rick and Morty” Book Coming Out Soon

Tweeted out a few days ago, “Coming soon from dark horse…”.

As you can see, it’ll be a behind the scenes book focusing on not only the art of the celebrated series, but the process of how Rick and Morty is exactly made and details behind their many wondrous characters.

There is no official release date yet, but, if it comes out before or during this year’s holiday season, we’re guessing it’ll be one of the more popular gifts that people will be buying up.

Finally, The Rick and Morty Season 3 Trailer and Premiere Date Are Here

Sentient pickles, a parody of Mad Max, and more multiverse Ricks are just a bit of what makes season 3 of Rick and Morty seem like it will rise to the occasion of being one of the most highly anticipated new seasons of television right now.

This Thursday, Adult Swim Will Stream a Marathon of All of “Rick and Morty” Leading Up to a Special Live, Sold Out Rick and Morty Event

Earlier today, a mysterious link was tweeted out about a live Rick and Morty event this Thursday somewhere in the LA area. Unsurprisingly, tickets to the live event were sold out.

Fret not for those unable to get tickets or not in the LA area. The live event (though its not clear what it is outside of it involving the “Rick and Morty team”) will be live streamed on adultswim.com/streams at 6PM PST on Thursday, June 29th.

Ahead of that, all two seasons of Rick and Morty will be streamed also at adultswim.com/streams starting at 3AM PST that same day.

Don’t think so? Watch it the announcement from Adult Swim’s YouTube channel.