‘Smoke, Worry, Fuck’ and Get ‘Smashed’ about Susan Burke 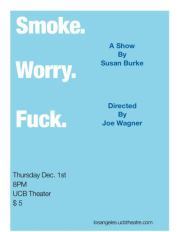 In Sundance’s newest line-up of films for their 2012 run that was announced today, you might have caught such high profile comedy names as Nick Offerman, Tim Heidecker, Eric Wareheim, and Lizzy Caplan. One name that you might have just read, but not taken note of was that of Susan Burke co-writer of the 2012 Sundance selection, Smashed.

Going against the oft-quoted advice of comics past to never start in LA, Susan has worked her way up through the windy, unmarked road trailing through the LA comedy scene doing sketch and stand-up to having penned a movie that not only has made it into Sundance, but has in the cast, the aforementioned Offerman as well as Megan Mullally. If you’ve seen her with the hilarious sketch group, Birds of Prey or her stand-up, you might, now, want to catch her one person storytelling show Smoke Worry Fuck tomorrow at the UCB Theatre in LA. So many people romanticize about how they wish they could catch their favorite comedians right before they broke, but so rarely take the opportunity when it’s presented. Smoke Worry Fuck is your chance to do so.

(Did you learn it yet? OK, maybe it’ll take a minute or so. I hear somewhere that something is committed to memory after 25 or so repetitions of it in your head. I’m not sure if “somewhere” is a credible source, but certainly we’re a more than credible source on what’s coming up in comedy, especially if it has in roots in LA or has even once stopped by one of hundreds of charming dive bars, of which Susan has plenty of funny stories about, for a few hours.)

Once you’ve learned the name, it should be easier to remember to go see the show, paired with Brian Finkelstein’s Three Strikes (he’s one of the hosts of the Moth in LA) and directed by another one of the funniest people we’ve come to know and love, Joe Wagner. We don’t think you need to remind yourself 25 times now.