You’ll be getting two-for-the-price-of-one here as it’s more episodes of The Good Place and more of Marc Evan Jackson getting to shine as a villain.

Look for the six episodes of The Selection, the digital series following how people end up under the supervision of Michael, on the NBC app. 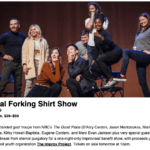 Surely, you’re not going to miss out on watching the cast of The Good Place to do an improv show that benefits the creative youth of Detroit at the Theatre at the Ace Hotel in DTLA in May, are you?

Well, best set a reminder for Friday 10AM PST to snag tickets and we have no doubt that this will sell out fast. You’ll be able to buy them tomorrow right here.

Is NBC’s “Must See TV” Back in the Form of “NBC Comedy Night”?

That’s not unlike NBC’s powerhouse sitcom block from yesteryear, Must See TV (of which Will & Grace used to be a part of and, we guess, be a bridge from past to present).

However, we’ll just have to wait and see if NBC Comedy Night can bring the peacock back to where NBC used to be, riding high from Seinfeld to Friends to Will & Grace.

Mike Schur is returning to television after having his series Parks and Recreation end perfectly last year.

His new show, The Good Place, is premiering tonight with back-to-back episodes starting at 10PM on NBC. The third episode will air on Thursday at 8:30PM, their actual weekly time slot.

We hope this will be a good start to NBC’s new comedy line-up for this fall.

Parks and Recreation may be done and gone, but Parks and Rec fans have a new Mike Schur-NBC venture to look forward to this fall: The Good Place.

Set in an afterlife that seems dreamed up by Leslie Knope, Kristen Bell plays a woman who thinks she has ended up in “the good place” by mistake. Ted Danson will guide her around as a mentor-of-sorts in trying to navigate her way around, especially since she recalls not being such a good person. There are plenty of great quirks in this afterlife universe that we can already see as potential great running gags for the series.

We’ll let the trailer take it from there.

The prodigal network returns to its best comedy showrunners with ideas that are adjacent to Parks and Recreation and 30 Rock. It’s about time that happened.

NBC has really focused in on dramas leaving comedies by the wayside as of late. With their new comedy slate announced today, they’re hoping to change that.

Mike Schur, Tina Fey and Robert Carlock, the minds behind the aforementioned, Parks and Recreation and 30 Rock, some of NBC’s most decorated comedies in recent memory, have gotten new life at the network.

NBC ordered Schur’s The Good Place that will focus on a woman contending with what being good really entails and a pilot from Fey and Carlock that will follow a mother and her daughter as they work at a cable news network with the mother as an intern.

We sincerely hope that this is the shot in the arm that NBC comedy needs and that’ll play out even better than the series that Schur, Fey, and Carlock brought to the peacock.