Though it’s cycling, this might be one of the crazier sports comedy specials that HBO has done in recent memory.

With that in mind, catch the world premiere of Tour de Pharmacy on HBO tonight.

HBO has already done specials parodying tennis, 7 Days in Hell, and baseball, Ferrell Takes the Field. Now, they’re moving on to the world of competitive cycling, specifically the part where they catch athletes using PEDs.

Look for the premiere on July 8th at 10PM on HBO. 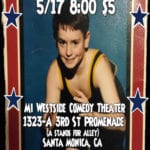 Sean Green does a sports themed talk show with a stacked line-up that knows how to break down sports comedically for non-sports fans and sports die hards alike.

It’s no secret that many folks have been trying to figure out how comedy and sports can mesh. HBO has done their faux sports documentaries including Ferrell Takes the Field and 7 Days in Hell for example.

Now, Above Average has enlisted Saturday Night Live co-head writer Bryan Tucker to spearhead The Kicker, their new offshoot that finds the intersection between comedy and sports in various types of web videos.

Here’s a bit of a preview of how they’re marrying the worlds of Weird Al Yankovic and Jamaal Charles.

The Kicker officially launched today and they’ve got plenty of videos for you to see if this new channel has room on your daily queue.

This weekend, they had 7 Days in Hell with Andy Samberg and Kit Harrington and in a couple months, they’ll have their very next comedy sports special, Ferrell Takes the Field.

Earlier this year, Will Ferrell played 10 positions on 10 different teams over the course of one day of MLB Spring Training and from the looks of this teaser, it has all the promise of a 47 year old Ferrell mixing it up in the big leagues.

Look for Ferrell Takes the Field’s premiere on Sept. 12th at 10PM on HBO.