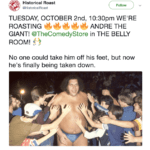 If your interest is peaked by Netflix’s recent series order for Historical Roast (or you’re already a fan), then you might want to go to the very next edition of Historical Roast at The Comedy Store Belly Room where legendary pro wrestler Andre the Giant will be the target/guest of honor to see it up close all for yourself.

Tickets are $5 (plus a 2 drink minimum) and you can (and should) go get them here.

Well, it looks like Comedy Central isn’t the only place you’ll be able to find comedy roasts anymore.

Historical Roast (and Fictional Roast), for a few years now, have been putting the feet of anything from WWII to Shakespeare to Disney Princesses to the fire for fun on stages across LA in appropriate costumes (including Nerdmelt, The Comedy Store, and Dynasty Typewriter).

Given the success of Roast Battle, we thought it only a matter of time before this show created by Eddie Furth, Ryan Pigg, and Samee Junio got picked up somewhere, which just happened to be Netflix.

Similar to the way that Roastmaster General Jeff Ross brought Roast Battle to the forefront, Ross will have his stamp on the six episodes ordered for Historical Roasts.

We’ll keep our ears to the ground for when tapings happen and let you know ASAP.