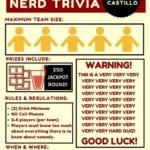 You’ve probably heard of quiz/trivia nights tailored specifically to something like The Beatles or The Simpsons (i.e. Stonecutters @ Nerdmelt, first Saturday of every month)

However, a entire night of Comedy Nerd Trivia might be just breaking new ground.

Two weeks from now, Lyric Hyperion Theatre & Cafe in Silverlake will be hosting its very first night of Comedy Nerd Trivia and having spoken to the folks putting it together (and offering up some trivia of our own), rest assured that it will indeed test the depths of your comedy knowledge. Also, the very, very fun Steven Castillo, who just made it to JFL Montreal’s New Faces this year, will be hosting.

As long as you have a team of 2-5 people and buy two drinks, you’re good to play.