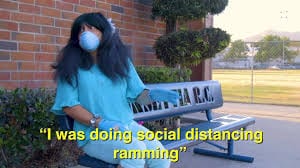 Forget all of those other stories about meeting up at a McDonald’s parking lot or walking six feet apart with someone that you’ve been on Zoom or FaceTime with off of dating app. Frankie Quinones and Donny Divanian, both from the amazing sketch group/series Dress Up Gang, show how you to properly romance your significant other during quarantine in a pretty safe, definitely distanced way.

Please enjoy (and take some cues from) Juanita Carmelita and Peter’s meet-up here. The way that we’ve all been stuck indoors has probably brought many people past the point of going stir-crazy into meltdowns, outbursts, etc. with their families or whomever they’re quarantined with. Therapy has always been important, but it’s an absolutely vital service to have someone to talk in these pandemic times.

That’s why husband/comedian Kurt Braunohler and wife/storyteller Lauren Cook sought out a “very special” therapist to deal with the strain of their relationship and made a short/sketch to “document” how they’re working through the unprecedented stress/anxiety brought about COVID-19.

It’s hard to find someone to listen.