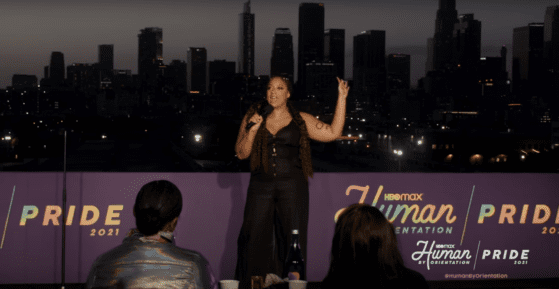 As a show of support, HBO Max is lifting up the voices of queer people of all backgrounds via their Human By Orientation series for the month of June.

One of the things that they did for said series was put some of the best queer comedians that need to be spotlighted, put them on a rooftop that has the DTLA skyline in the background, and have them do a set. One of those comedians is Ashley Ray, who put on such a delightful set (in spite of coming out of quarantine and having this do that on a somewhat breezy LA evening) focused on how hard it is to be a saint on all fronts these days.

Since there seems to be way less stand-up on late night and less places for short stand-up sets to live with the branding of a major network or streaming service (i.e. less opportunity for up and comedians to get discovered on big platforms that used to have way more comedy), we’re glad to see HBO Max highlighting queer comedians with Human By Orientation and we hope that they keep it up.