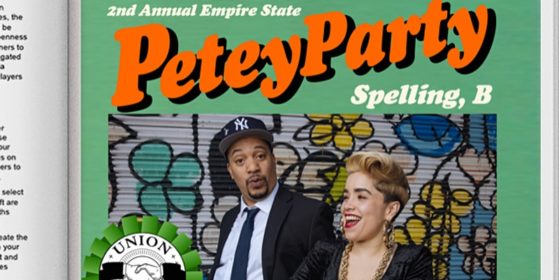 Spelling bees and comedy don’t cross paths enough, to be honest. Whenever they do, it’s usually a damn good time (and often involves the performers being inebriated somehow).

With that in mind, we want to give you a heads up on The 2nd Annual Empire State Spelling, B, hosted by the amazing hosting duo of Peter DeAbreu and Zilla Vodnas, this Thursday, Sept. 23rd. Petey and Zilla are doing a NYC-specific spelling bee that will really test how well NYC comedy’s best know a) how to spell & b) how well they know the five boroughs.

Here’s a fun little promo they made just for this show.

The 2nd Annual Empire State Spelling, B is set for 10PM ET this Thurs. Sept. 23rd at Brooklyn’s Union Hall (21+, proof of vaccination required). Tickets are $10 right now and $12 on the day of. Best go get them tickets right now.