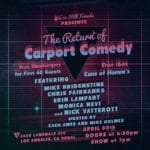 It’s yet another case of “if you build it, they will come” as Carport Comedy (it’s literally a comedy show done from a carport in a driveway) returns this weekend.

It’s a great line-up plus there’s free food while you can get it. Get more details here.

Mike Bridenstine and Mike Holmes Do Every Song Ever of Eminem, Red Hot Chili Peppers, The Beastie Boys and Green Day

As far as song parodies/medleys go, Mike Bridenstine and Mike Holmes’ Every Song Ever cover band is pretty amazing.

Watch this performance of how they succinctly parody the catalogs of Eminem, The Red Hot Chili Peppers, The Beastie Boys, and even Green Day. 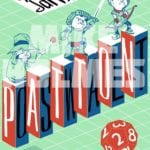 Patton Oswalt Live posters by the hilarious and multi-talented Mike Holmes.  Looks like comedy shows is on it’s way to being as cool as rock concerts…

1) It’s a theory that the further you drive outside of Los Angeles proper, the more stage time you can get as a comedian.  Cafe on 2nd in Alhambra gives more support to that argument as you are guaranteed at least 10 min. after $3 cover.  Being a mixed mic, musicians and poets actually want to listen to your set as opposed to bitter comics trying to going over their set or figuring out a riff off of you.  Though I had to pay $3 and had to drive to Alhambra, all the way in the heart of the San Gabriel Valley, I ended up getting 15 min., which is indispensable to building an act/developing stage presence/making sure you don’t bomb for 5 min. when it counts.  Another “Bureau Approved Open Mic” Cafe on 2nd runs every Wed. and Thurs.  Sign-up at 7PM. Starts at 7:30PM. $3 cover. 7 S. 2nd St., Alhambra, CA.

2) I don’t know why I’ve never been to Ed Galvez’s Punk House before, especially knowing that he puts up some of LA’s funniest on a stage in an alley behind the 3rd St. Promenade in Santa Monica.  With Sean Green at the reins, Eli Olsberg, Mike Holmes, Josh Androsky, Matt Manser, Erin Crapser, Ed Galvez himself, and a surprise appearance by Geoff Brousseau made for a night way more entertaining that watching people argue with the Christian evangelist on the actual 3rd St. Promenade.  Running for over 4 years, Punk House is a testament to legitimately hilarious comedy shows outside of the Hollywood trifecta of the Laugh Factory, Comedy Store, and the Hollywood Improv.  Ed Galvez’s Punk House @ The Westside Comedy Theatre. 9PM Every Wednesday. $8. 1323-A 3rd St., Santa Monica, CA (in the alley).

4) LA Comedian/a quarter of the Southern Comedy Quartet Jarrod Harris has a new webseries, Action Figure Therapy, which amazingly manages to be more therapeutic for anyone watching than the actual “action figure” supposedly getting therapy.  Check it out here.

7) Breaking news for the Big Trouble in Little Tokyo Open Mic.  There will be a 50 ft. cable to walk around almost like it’s a wireless mic.  Also, to kick off with a bang and a mic toss, there will be inaugural performances to the incomparable Joe Braza and Lauren Rochelle.  Nov. 9th. 6:30PM. Señor Fish. 422 E. 1st St., Los Angeles, CA

8) I think there’s a PG way to go about suicide jokes.  There better be… BECAUSE I HAVE NOTHING ELSE!!!