Many has the cartoon been made that takes place in grade school full of weird, bizarre, creepy, but ultimately funny set pieces. Yet, it has rarely been done sans animation in a school converted from a cursed insane asylum.

Well, that’s where we are all in luck with Matt Peters (you might have just seen him on Orange Is The New Black) & Aaron Alberstein’s pilot presentation for their series ‘Institutionalized’ comes in featuring just what we were mentioning above, a bunch of really funny people like Davey Johnson, Lizzy Cooperman, director Mike Upchurch, and a lot of twisted hilarity. 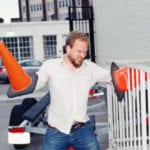 Comedian Matt Peters with traffic cones for arms getting one stuck in/punching hand-railing. 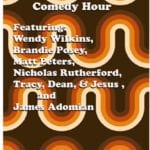 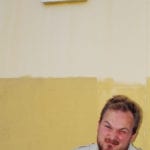 1) Tales of the Black Freighter @ R-Bar is what people should think of a LA comedy show, as opposed to what they might see at the Comedy Store and the Hollywood Improv on a given night.  Located in the heart of K-town on 8th St., as opposed to the gentrified glitz of Wilshire Blvd., with several Mexican hole-in-the-walls and Korean BBQs, one walks into R-bar and is immediately transported into yet another state of mind with there being a password (that they will just give you) to enter the extremely intimate bar, an entirely dark wooded interior, and offerings of the Sazerac from the friendly, neighborly staff AND THEN, there’s a great comedy show.  With Last Comic Standing Finalist James Adomian hosting and telling his version of Russian joke families, Eddie Pepitone, Karl Hess, Jimmy Dore, and Eric Andre gave the audience the complete fantastically opposite experience of a Hollywood comedy show.  Details of the Tales of the Black Frieghter will come as the Comedy Bureau receives them, but there is another regularly scheduled, one-Tuesday-a-month live comedy show at R-bar (3331 W. 8th St., Los Angeles, CA) called Blamblamblam hosted by Matt Peters.  Don’t miss the next one on this Tues. Nov. 9th at 9PM for FREE.

3) If anyone actually followed the live tweet of last night’s sojourn to Sushi King for the supposed midnight open mic, you would have found that they moved it to Tuesday.  Personal sidenote: I don’t know how receptive Sushi King is to comedy if they ACTUALLY THOUGHT I was going to have sushi delivered from Hollywood to Long Beach after I showed up for a comedy open mic at midnight.  Live tweeting tonight from Marty’s/The Open Mic at 5PM.  Follow here.

4) If you are opting to stay at home tonight, you better be watching the return of Conan O’Brien on TV/the world having hope or at least having some great fun before it goes down in flames. 11PM on TBS.

5) RT @ Braunger LA comics! @sarahtiana is collecting merch for the troops.  Drop off your CDs, records, etc at the Improv, Comedy Store, and the Icehouse.

6) I’ll say it again: Greater LA Open Mic Map. Greater LA Comedy Landscape. Both now with buttons and will be updated regularly.  I wish paying my overdue parking ticket was this easy.

7) DON’T HAVE FEAR even though there will be some Big Trouble in Little Tokyo with the Big Trouble in Little Tokyo Open Mic kicking off and kicking hard tomorrow night Tues. Nov. 9th at 6:30PM. Please don’t be square/no show.  Come to Señor Fish, 422 E. 1st. St., Los Angeles, CA (I apologize.  You can be square, but please come down because it will be “that” much greater if you do)

8) I could give you a million very depressing reasons that no one really needs to hear about what I go through to run the Comedy Bureau, but, instead, I’m just going to say, if you are able and willing, please donate here.

9) Walking for 2 hours around Koreatown, horribly alone, might just be a great way to get material, though I’m pretty sure writing, “You ever been so alone that you wished you’ve been mugged just to remind you of your existence?” isn’t really all that funny.  It sounds “forced”, but I’ll find that out for sure at an open mic tonight.