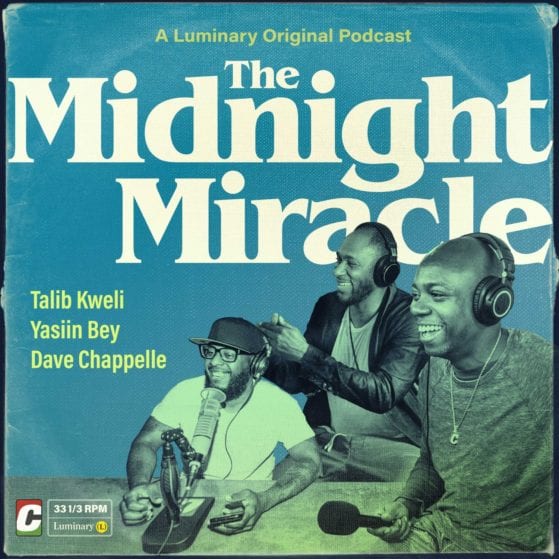 Dave Chappelle shook up the world of comedy when going to Africa in the middle of the production of Chappelle’s Show 3rd season. It was 2005 and Dave Chappelle was unequivocally the biggest name in comedy back then and lines from the show’s sketches were probably quoted several times a second by people around the world.

As you well know, Chappelle took a long hiatus and then gradually started making his way back into stand-up probably clocking more stage time than any other comedian in history by doing shows or drop-ins that were infamous for often going far past two hours. Then, there was the official return with a whole row of Netflix specials and continuing to do stand-up, even releasing a “very special” special at the height of last Summer’s protests sparked by the murder of George Floyd.

Still, Dave has not taken the reins to his own show since 2006 and it hasn’t been the same since.

That all might change with the arrival of a new Luminary podcast The Midnight Miracle that Dave is doing with two of the most renowned rappers around, Yasiin Bey and Talib Kweli. It “will feature conversations punctuated with sketches, impersonations, archival audio clips, a musical soundtrack and guest interviews.” (via Deadline). This teaser doesn’t reveal much of anything, but one can see how it very much be a continuation of Chappelle’s Show with that particular mix of things.

As to what exactly The Midnight Miracle will be, if it’ll even take on more of Dave’s more sobering tone these days than the more sarcastic and satirical nature of his legendary sketch series from over 15 years ago, and how much it will affect comedy history will just have to be seen when the podcast drops.

"To the one who has created the all…"
Talib Kweli, Yasiin Bey, and Dave Chappelle welcome you to The #MidnightMiracle. pic.twitter.com/dHBF1wJIYf

As Team Coco has had immense success with their foray into podcasting via Conan O’Brien Needs a Friend, they’re expanding their slate to include scripted podcasts.

Their first release Frontier Tween is a hoot of a series from Jen Jackson, Louisa Kellogg, and Katy Yeiser that features quite the cast in Maria Bamford, Kerri Kenney, Mary Sohn, Tim Baltz, Jen Jackson, and Conan O’Brien. As the title suggests, a follows the life of one Tilly Mulch, a so-called Frontier Tween, and her life coming-of-age in the wide open plains.

The writing is charming, not unlike the warmth of a fire at a genuine country diner, and Bamford’s performance, per usual, is absolutely engrossing and so hilarious.

Get a small taste of Frontier Tween in this trailer.

If you’re into it, get into Frontier Tween over at Luminary Podcast here.