While there is often a worry in music about a band’s sophomore album, there is absolutely nothing to worry about with Jerry Rocha’s sophomore offering, Pickle Dick.

Rocha hammers out another fun hour relentless, unfiltered honesty that’s as vulnerable as it is loose and screwy. From being dumped at Comic-Con to dissecting the JFK assassination site, Jerry treads on dark territory, but has such a spirited stage presence the whole time that it’s a fun ride from start to finish.

Get Pickle Dick on iTunes here.

DVR either Fuse or HBO at 10PM, then watch the other live.

Both Amy Schumer: Live at The Apollo and The Gentlemen Jerry Rocha have their premieres tonight at 10PM on HBO and Fuse, respectively.

Both are solid choices to watch, so try and watch both however you can pull that off.

The latest stand-up performance on Conan comes from Jerry Rocha who defies your expectations as someone who is Mexican, but kind of doesn’t look the stereotypical part.

Comedy Albums from Maria Bamford, Moshe Kasher, Jerry Rocha, and Andy Kaufman That You Should Get

Lucky day for comedy fans or, really, anyone who likes to laugh a lot as there are four big comedy album releases today.

So skip out going out to dinner and drinks for these comedy albums because you can probably eat some leftovers that haven’t expired yet. It’ll be worth it.

Jerry Rocha has taken quite the road leading up to this very first comedy album from being a semi-finalist on Last Comic Standing years ago in his first nationally televised appearance (and several years of honing his comedy before that of course) all the way to know and we’re excited to see that “Take That, Real Dad” from Stand Up! Records finally put Rocha’s delightfully gritty stand up on record for all to hear. 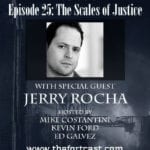 Jerry Rocha on the Fortcast!

1) Despite showing up late, Beer in the Shower @ White Horse Inn Cocktail Lounge, catching Nick Vatterott and Jerry Rocha w/host Paul Danke was THE WAY to close out a Wednesday night especially if someone said about everything you’ve written a few hours earlier, “I don’t understand any of your fuckin’ shit, man.  What the hell is going on your head? I can tell you don’t sleep.  You should sleep and stop writing.”  If only I skipped my screenwriter’s group, I would have caught the hilarity of Shawn Pearlman, Eddie Pepitone, and Fortune Feimster.  Catch Beer in the Shower every Wednesday, 10PM @ White Horse.

2) Just because its miles outside of LA proper, doesn’t mean that there’s nothing funny about Long Beach.  Comedians Chris Adams and Jerry Brandt prove that in spades and THEN SOME with their weekly podcast Drinking Buddies.  This week, longtime LA comedy vet Don Barris and the hilarious Tim Babb talk everything from comedy to Disneyland to rape and, of course, drinking.  See how everything connects here.

3) “Jesse Miller.  Straight up.” –Andre Hyland.  Every few weeks at the AMAZING Anna Lee Lawson Comedy Hour @ The Next Stage Theatre, Andre Hyland transforms into Jesse Miller and takes over with the Jesse Miller Talk Show (next one’s in November).  Check out Jesse on a Trikke.  Again, it’s straight up.

4) From the World Famous Comedy Garage, quintessential hipster LA comedian Paul Danke gives you some advice on Halloween costumes so you don’t look totally lame, unless you’re being ironic, well, then, you know what I mean….  Check it on Funny or Die here.