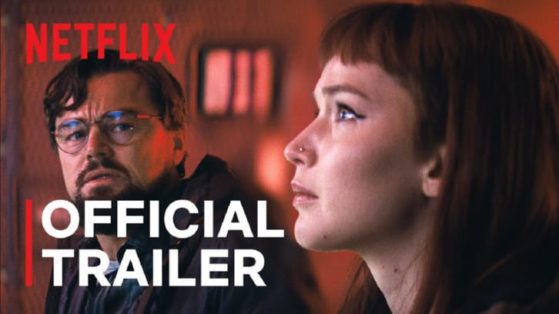 Adam McKay’s devastatingly searing Vice took on the life and times of one Dick Cheney. Before that, McKay put the world on notice of his new leaf as a satirist auteur and a brutally effective one at that with The Big Short, focusing on the few that profited off of knowing the 2008 housing market crash was going to happen.

So much science has pointed out how clearly climate change is being caused by man made choices and the world as a whole, at this point, seems to be doing very little other than lip service. That’s where McKay is positing his lens on this go around with Don’t Look Up, a cautionary tale about ignoring all the signs of trouble that are very clear to see, but just so much easier to ignore and go on living life as you were (hence the film’s title).

Just from the trailer, you can see this might even be more biting than either Vice or The Big Short to the point that having a gigantic cast that features the big and brightest stars in Hollywood seems secondary to the message at stake when the nations and countries of the world aren’t addressing very clear and present danger.

Odds are you’ve probably seen this trailer already (DiCaprio and Lawrence are the stars of it after all and Meryl Streep plays POTUS), but for the sake of the point Adam McKay is trying to make, watch it again here, then watch it on Dec. 10th in theaters or Dec. 24th on Netflix.

Lawrence has got Oscar bait and big tentpole film franchises under her belt. Now, on to comedy.

Project Delirum will be the second comedy project that Jennifer Lawrence currently has in the works. Already, she writing a sisters comedy with Amy Schumer and now she’s attached to direct this feature delving into the drug-fueled military experiments of the 60s and how wrong they went.

If her successes from Winter’s Bone to Silver Linings Playbook to The Hunger Games to more as well as her hitting it off as friends with Schumer and her general off camera demeanor suggest anything, we’d wager that she’s going to make a big splash in comedy coming up.

That’s not much to go off of, but it’s still very enticing.

So, we’re imagining Jennifer Lawrence’s character in American Hustle dealing with Amy Schumer as flight attendant who is her sister. We’re in for that.

Lawrence briefly described the project in a recent interview on Entertainment Tonight and you can’t help but think of what great shouting matches will happen in this movie.

When asked about male co-stars, she also added that there aren’t really any boys in it.

We’d be surprised if this movie doesn’t get fast tracked soon.

It’s like they’re trying to break the Internet or something.

After becoming close friends quickly this summer, Schumer and Lawrence have spent much of their time recently trading pages or a movie that they’re writing together.

Thus far, the only thing known about this movie is that Amy and Jennifer will play sisters. Given how much star power/bankability the two have, we imagine that a studio will pick up this very soon.

Weeks ago, Jennifer Lawrence’s private pictures were wrongly hacked and stolen. As it was a crime and an horrid invasion of privacy, comedy group The Cotillion Girls have something to say where they want to correct this injustice, sort of.

Watch and listen to their message here.