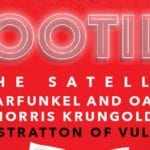 The Cooties are, in our opinion, one of the best musical comedy acts around. Their harmonies and absurdist lyrics are so unabashedly and undeniably fun and sweet to the ear.

It has been a minute since they’ve played in town, so don’t miss their latest show on Thu. Feb. 28th 8PM at The Satellite (which will just also feature another one of the best musical comedy acts around, Garfunkel & Oates, and even a member of the wondrous indie pop band Vulfpeck, Jack Stratton).

The Meltdown with Jonah and Kumail has sure been having as much on stage as they have off stage. Just check out Todd Glass give out ice cream “Ed Debevic’s” style and Pete Holmes, Kyle Kinane, and Thomas Lennon jam out a “forgotten" Garfunkel & Oates cut as a three piece band in front of Garfunkel & Oates.

After watching that, make sure you’re watching every Wed. on Comedy Central at 12:30AM as well as going to the live show also every wed. at Nerdmelt, 8:30PM.

In all of our anticipation for the upcoming Garfunkel & Oates series on IFC, IFC very nicely has put up a fun, full episode for our enjoyment that you can watch right now.

See what goes on beyond the songs of Riki Lindhome and Kate Micucci in addition to their songs right here. There are also some surprise cameos from TJ Miller, Nick Thune, and more.

Garfunkel & Oates Going on U.S. Tour After Their Series Premiere

Following the premiere of Garfunkel & Oates the series on IFC on Aug. 7th, Kate Micucci and Riki Lindhome will tour in 14 cities across the country.

Pre-sales will start on Wednesday and then tickets will go on sale on Friday and they’re probably going to go quick.

In case you haven’t heard the news by now, Fred Savage, likely better known to you as Kevin Arnold from seminal 90s series The Wonder Years, will be director and executive producer for the whole series of Garfunkel and Oates at IFC slated to debut this summer.

Whether it happens or not, we know that you’re imagining Garfunkel & Oates covering, possibly parodying Joe Cocker’s With a Little Help From My Friends.