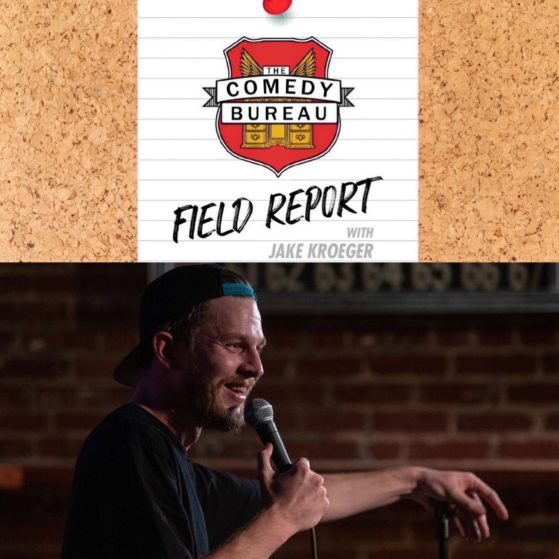 Building your own thing in the thick of a sprawling comedy scene is beyond a tall order. If that thing is a weekly comedy show that expands into an entire brand that now has branched out to the thriving comedy scene in Denver, it’s even more impressive.

That’s exactly what one Mike Mulloy has done with Faded Comedy over the last few years, tirelessly working to make a cornerstone Friday stand-up show (one of the hardest days to pull off a weekly indie comedy show in LA, FYI) and branching out to do more shows, more cities, and do so with the comedians he digs. Faded managed to stay virtual through lockdown and keep going with a virtual presence with their weekly Happy Hours on Twitch and live-streaming in-person shows. Mulloy and TCB’s Jake Kroeger go into how Mike has carved out this niche in LA comedy as well as do “hot” (and some actually hot) takes on more Chappelle “The Closer” non-sense, the Joan Rivers biopic getting nixed, and more.

When it came to Friday nights in LA, one of the best spots to be for live stand-up comedy was tucked away through several hallways at an acting studio on Melrose. That was where Faded Comedy had finally made their new home and was packing in crowds with truly many of the city’s best stand-ups (and whoever was great that happen to be in town). The Faded Comedy gang of Mike Mulloy, David Gborie, Sean Jordan, Zak Toscani, and Bri Pruett corralled a great weekly stand-up show no matter where it was (originally at an art supply store, then a belly dancing studio).

Now, they’re back at the Lounge on Melrose right where they left off from March 2020 and they’re doing limited capacity with proof of vaccination upon their return, scheduled for Fri. July 9th. Tickets are $15 and are being sold in pairs or groups of four. Thus, you should go get your tickets right when then go on sale this Fri., Jun. 25th at 12PM PT. 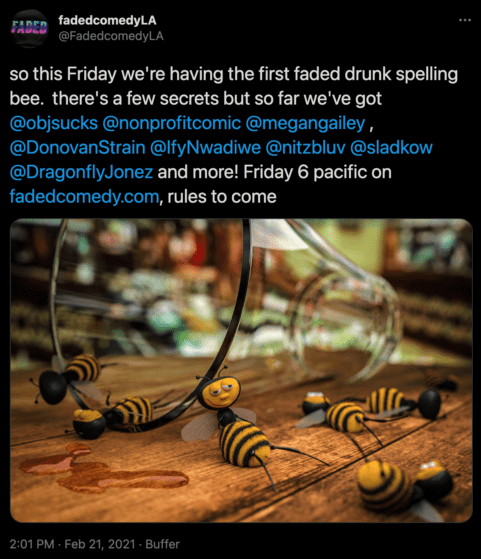 Watching adults trying to spell while wasted on the sauce is a pretty damn good time.

We got to catch such this hilariously inebriated phenomenon a couple of times before lockdown, but we haven’t been so lucky to catch it since last March.

Thankfully, the Faded Comedy gang is gearing up for such a thing on their Twitch channel this Friday. This first Faded Drunk Spelling Bee will, thus far, feature the likes of @objsucks, @nonprofitcomic, @megangailey, @DonovanStrain, @IfyNwadiwe, @nitzbluv, @sladkow, @DragonflyJonez, and more contestants who possibly will get in over their heads trying to use a skill that has very likely been used in years due to autocorrect.

The Faded Drunk Spelling Bee will stream live on Fri. Feb. 26th at 6PM PT/9PM ET at twitch.tv/fadedcomedyla. As always with Twitch live-streams, live-stream access is free, but donations are accepted.